Alfred Wheelock Woodward was an American homeopath and one of the foremost physicians in the West. He was born on July 18, 1839, in Barnstable, Mass.  When a boy of eight years, in 1847, he moved with his parents to Galena, but soon after went to Platteville, Wis., to be educated. There, he received his preliminary education, under Prof. J. L. Pickard, and remained until 1857.

He came to Chicago in 1860 and was engaged in business until January 1862, when he enlisted in the Waterhouee Battery, the First Illinois Volunteers. He was promoted shortly afterwards to first or second lieutenant. He participated in the battles of Pittsburg Landing, Memphis and Vicksburg, and made an enviable record as a soldier.

Returning to Chicago in 1863, he entered the Hahnemann Medical College, from which he graduated in 1865. He immediately commenced practice and continued active in his profession until 1900. Woodward withdrew from the Hahnemann Medical College and became one of the founders of the Chicago Homoeopathic College, its vice-president and professor of Materia Medica, being dedicated to thorough training and a high standard of requirement, both for entrance and graduation. His work there was always his greatest delight. Although the work of the Chicago Homeopathic Medical College was a success, it later consolidated with the Hahnemann Medical College of Chicago as it was not thought to be wise to have two homeopathy colleges in Chicago. Woodward first became the business manager and later the treasurer. He was a teacher of materia medica and clinical therapeutics at the college for more than twenty-five years.

Dr.Woodward died on November, 9th, in 1902, passing away in a peaceful sleep at his home, 130 Ashland Boulevard, Chicago.  The cause of his death was Bright‘s disease. His death was a shock to his friends of whom a great many had known him intimately for half a century. Woodward was married in 1870 to Miss Abbie E.  who survived him.

It is not through medical literature and in college work alone, however, that Dr. Woodward will be remembered, for, added to his fine intellect, his retentive memory, his fondness of details and an indefatigable energy, he had that rare sympathy, calm delicacy and refinement which made him most welcome in the sick-room: and in homes of many today his loss is felt as that of an intimate personal friend.“[1]

Dr. Woodward was in every sense of the word a great man, and no words could better express his ideal of life than those he himself once uttered in behalf of a friend: “He realized that there are two standards of success, one which is measured by accumulated riches, and another in which a man leaves the world his debtor – for the debt it owes cannot be paid in gold. In the former the debt is lionidated. In the latter it is at interest payable only in gratitude. The first standard is attainable by one of sufficient comfort and fixedness of purpose. The second, as a rule, is only won by him who is indifferent to the first. The second comes with God’s help, from high ideals and a spiritual nature. He who seeks the first lives in the present. He who seeks the second lives in the future. The one is at home here. The other has not yet arrived at home.” [2]

Dr. Woodward was descended from a family of college educators and jurists. His heritage was a rich one, but he has enhanced it. He has made various contributions to medical literature, his supreme effort being embodied in the volume on Constitutional Therapeutics, The Patient, Not the Disease, in which he describes the results of investigating the sequence of affected organs and tissues in the patient and the remedy as a therapeutic guide. This work was but lately finished.

Woodward emphasized the need for constitutional prescribing so that patients may all need a different remedy, even when suffering from the same disease. The same disease may rise from different causes, and the patient’s idiosyncrasia manifests through certain concomitant symptoms, so that there is a difference in the aggregate of symptoms in each case. The constitutional peculiarities of each patient determine why the disease develops in a different manner. The soil in which a disease is planted often modifies, almost beyond recognition, the symptoms of the disease itself. [3]

Alfred Wheelock Woodward was an ardent homeopath, convinced about the limitless power of homeopathic remedies to restore health: However complicated the case, however remote the causes, the remedy is equal to the situation. [4]

[3] A.W.Woodward, Constitutional Therapeutics, The Patient, Not the Disease, p.27

[4] A.W.Woodward, Constitutional Therapeutics, The Patient, Not the Disease, p.79 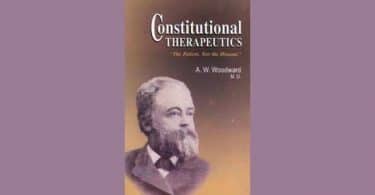 A. W. Woodward’s Similarity in the Sequence of Affected Organs and Tissues As a Therapeutic Guide