There are two types of dysmenorrhoea depending upon the cause.

Primary dysmenorrhea occurs in the absence of any significant pathological cause for the pain. This type of menstrual pain is most commonly seen in young women during the years following the onset of menstruation. 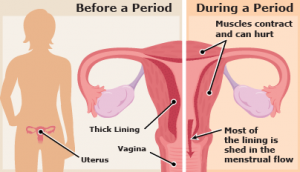 with menstrual discomfort. The tissue that lines the uterus (endometrium) produces these chemicals, and they are released with the onset of menses when the uterine lining breaks down. Prostaglandins stimulate the uterine muscle to contract. Women who have high levels of prostaglandins experience more intense contractions of their uterus, and these produce more pain. Prostaglandins also may be responsible for vomiting, diarrhea, and headaches that frequently accompany painful periods.

Secondary dysmenorrhea can be caused by pathological conditions of the reproductive tract, such as the following:

Measures that may reduce the risk of menstrual cramps include:

Who hasn’t had menstrual cramps!  Well, alright, at least half of you, as I’m guessing you’re men.  But the other half are going to know what I’m talking about.  Hopefully, you have a home remedy kit, do you?  Go to www.a2zhomeopathy.com and order their 30C Emergency Kit, it contains 50 remedies in a very small case that you can carry with you.  Washington Homeopathics also sells an emergency kit of the same size.  In Europe, check out Helios and Ainsworth’s for online orders.  Check out Amazon and, of course, many other vendors sell emergency kits as well. That being said, here are your remedies for painful menses:

How to take your remedy:

Tap one, two or three 30C pellets into the cap of the remedy bottle and pop them into your mouth.  Allow them to melt.

If subsequent doses are needed, tap a few pellets into a bottle of water, shake the bottle and take a sip as often as the severity of the condition seems to warrant.  Always remember to shake the bottle first.  By putting the remedy in water and shaking before each dose, we can prevent the problems that might come from overdosing.

How often to take the remedy depends on how much or how little you’re improving since the first dose.  If at any time there is a striking or noticeable improvement, there is no reason to keep taking the remedy unless the improvement stops.

If the improvement is advancing slowly, a general rule is take the remedy 3 or 4 times a day for 3 days, and stop or take less often when you are sure you are getting better.

Since there are no real rules about this, the idea is to take the remedy often enough to ensure a steady improvement, but not so often that you cause an aggravation.  In fact, if at any time you think you’re getting worse, stop the remedy.  You may have caused an aggravation, but, that should wear off quickly and an improvement should follow.  Again, if the improvement slows down or stops, repeat the dose.  In general, if there has been no improvement at all after 3 doses or 6 hours, try another remedy.

If you are helped by one of these remedies but find that the symptoms keep coming back every month just the same, you might want to consider seeing a homeopath for constitutional treatment, which means prescribing for the whole person, so that you can be free of painful menses once and for all.