Dr. Kavitha Kukunoor presents a case of Tourette and OCD in a man of 26.

A man of 26 consulted me in 2016 for his Tourette syndrome, OCD and lack of sleep. He developed it when he was in college. The last two years his symptoms were very bad. He had stopped allopathic drugs a long time before he consulted me.

Doctor (D): Please tell what is bothering you the most?

Patient (P): I am diagnosed as Tourette syndrome & OCD, very difficult to manage. All symptoms are worse mostly on left side. I am seeing psychiatrist and he has had me variously on OCD (Homeopathy for Obsessive Compulsive Disorder) and depression medicines Lexipro, prozac, Anafril, Welbutrine, Rispedal (dopamine antigonist), Halopredal Pimozide, Topomax, Abilifyetc.

D: How it it affecting you?

P: Impaired my whole life,even when into depression. I’m a person who demands excellence all through life in school, writing. In high school I  didn’t talk to people much, brood on things, feel bad about it, not know what to do, very powerless in lots of situations, better with consolation.

D: How didyou feel at that time?

D: What do you experience when you are anxious?

P: Sensation as if someone is stopping or inhibiting me in interacting. Opposite is wanting more of freedom. Feel like in prison, trapped, want freedom, floating around, spiritual, unlimited, omnipresent. Feel like caged, boundaries can’t break, constricted, don’t want to be aware of my existence.

P: My rash is back since 5 months on neck, chest. It is itchy, burning. Arthritis before rash, from elbow to finger. Eruptions slightly elevated, brown spots, white scales, started on chest, neck, abdomen, gentials, <night, midnight 1am, cold weather, >scratching.  Constant, itch on different parts and then scratch. Physical restlessness, always urge to move. I imitate actions of others, move my eyes if I see someone moving neck, then I feel like moving. My body does without my consciousness, feels like there is conflict with my will. I feel better by >moving

P: Bad lung infection in 2010 and took antibiotics for it as well as for skin condition.  Symptoms worse 2014 and had high mental stress. Dad died when I am 3 yrs age, uncomfortable environment, angry.

Had chicken pox when young.

In 2001 had warts on palms and knuckles, isolated, 5-6 warts 1/2 cm long both sides.  Had Depression in 11th grade (2008 & 2009) Several years back for arthritic pains took treatment for 1 yr with Dr Sankaran and felt very good, and improved a lot under his treatment.

D: How do you feel in general with respect to temperature?

D: What you are sensitive to?

Dreams: Failing high school, failed exam, (scared, confused, not knowing what I did and how to fix it), spiritual leaders of past and present (warm feeling, reassurance.

Believe in heartful meditation – You are divine, one with God

P: Occasionally dream of falling down

P: When young had fear of heights, don’t like open water.

Doctor note: This patient took appointment but cancelled as he felt he can’t pay fee even though he is earning money. (Fear of poverty?) 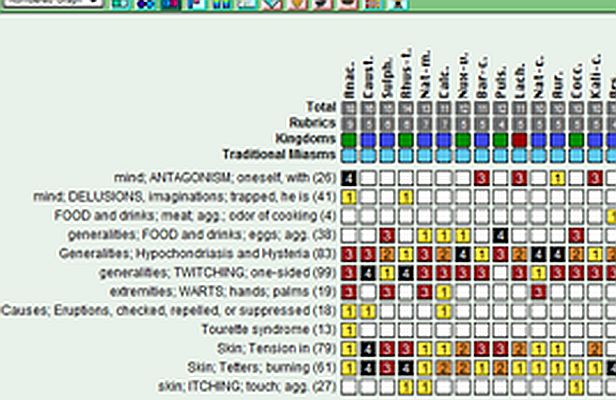 Symptoms / Rubrics considered are as below

*the number in brackets shows number of remedies that cover that particular symptom.

Rx:  Psorinum 1M –1 dose and after 2 weeks Anacardium 30c – daily twice for 1 week and followed by once a day for another week and repeat only when needed.

70% better with mood and skin symptoms, sleep is good.

>alone , not self conscious or  <in company

Less of a caged feeling but still restricted,stuck and trapped sensation seen to some extent.

“Realizing I am the power. Each one is creator. Focus on positive things, soul, heartful meditation, using will power.

Since there is improvement in symptoms I kept him on the same remedy as the sensation is still the same.

Body feels lighter and free, no caged or trapped sensation

Sleep is good, getting better overall

I checked with him and he said he is improving and doing well.

There is lot of sensitivity in this case so I selected a remedy from the plant kingdom. No issues of survival or competition or lack of something so ruled out animal or mineral kingdom.

Anacardium: The main sensation in Anacardiaceae family is: caught, stiff not able to move and stuck in one place. If cancer miasm is included then feeling is caught in one spot and superhuman effort is needed to come out of it (Vital Quest  – R. Sankaran).  Anacardium covers most of the above symptoms (antagonism with will, sensation he is trapped, hypochondria, one sided twitching, warts on palms, Tourette syndrome & OCD, dreams of falling and skin symptoms etc)

Psorinum was given as the patient is chilly and aggravated from cold, anxiety and hopelessness about the future, deep anxiety states with restlessness and anguish, anxiety and restlessness at night. Feels forsaken or isolated. Anguish and despairing from skin diseases. Poverty consciousness. Itching worse at night and worse by touch. Suppression of skin symptoms. Aversion to odor of cooking meat. Worse from eggs.

Indication for Indigo remedy: It acts like an anesthetic and helps to relieve pain. It is good for anxiety states when emotions run high. It calms the emotions and helps to focus the mind. Issues related to wisdom, knowledge, imagination, intuition and discernment and it is good for unclear thinking, closed mindedness.

Indication for Violet remedy: It comforts the soul and acts like anesthetic and purifier on the physical level. Issues related to beauty, harmony, spirituality, love of god and it is good when there is disharmony and lack of spiritual sense. Dr. Kavitha Kukunoor, CCH, RS Hom (NA), BHMS is a nationally board-certified classical homeopath, practicing homeopathy since 1995. She lives & practises in Novi, Michigan. She is President & CEO of Kavitha Holistic Approach (KHA), Founder & Director of KHA homeopathy study group pro bono. She can be reached at [email protected] or at her website www.kavithakhomeo.com.