Female patient, 45 years old, came to see me in October 2008, on recommendation of another patient. The presenting complaint was depression; she had been on antidepressants for the past eight years. The depression was currently fuelled by the breakup of a relationship and the sudden death of her dad three months back.

The mental symptoms the patient presented were:

â€¢ Low self esteem
â€¢ Feeling to be a victim
â€¢ Feeling alone, lonely
â€¢ Grief, due to the sudden death of her dad
â€¢ Resentful
â€¢ Lack of help from others, but doesn’t ask for it anymore
â€¢ Lack of trust; has been let down often; has been cheated on
â€¢ Desire to cry and send people away
â€¢ Desires comforting
â€¢ Anxiety, panic attacks, dread – as if she had done something wrong; cannot relax
â€¢ Doesn’t see anything nice about herself
â€¢ Anxiety of not having control
â€¢ Fear of failure
â€¢ Dreams of punching people
â€¢ Short term memory weak < alcohol
â€¢ Dreams and reality are not distinguishable at times – scary

Took Cocculus 30C as instructed; takes dose right when she wakes up.

– Haven’t been angry at all – noticed difference after the initial dose
– A lot calmer; things don’t bother her as much anymore
– Doesn’t get upset or anxious
– Has been able to get two hours sleep a day – in the afternoon – without sleeping pill
– Still takes sleeping pill at night; wakes at 4am now.
– For the first time in 30 years she read a book for leisure
– Went to see new psychologist; very happy with her
– Appetite normal; probably eat more then I should. Dieted for 7 days: fruit, veg, no alcohol
– Don’t feel I need the red wine anymore; cut down to two glasses a night (from a bottle most nights)
– Hasn’t had tension headache since initial consultation
– Bruise a bit less easily
– No longer resentful
– Have been a lot more assertive
– Aloneness has not been a problem
– I do what can be done to have as much control as possible
– I am handling things so much better
– More positive and initiative
– Haven’t had any problems to distinguish dreams from reality
– Vomiting hasn’t occurred; both known triggers are no longer existent.

Prescription: Cocculus 30 once daily. Keep fluid levels up and alcohol level down.

– Has seen her GP since last consultation, who advised to halve the dosage of Beta blockers and antidepressant.
(Blood pressure (medicated) now 109/79; was 153/111 in September 08.)
– Feels so much calmer; things don’t upset anymore
– Takes everything in her stride
– Things she doesn’t have control over, she lets go and doesn’t get anxious anymore.
– Has cleaned up relationships “so they are done and dusted and the old stuff can be put away”.
– People apologised to her about their behaviour.
– “Self esteem is increasing slowly”. – comment from patient
– Doesn’t feel as needy for help anymore.
– Hasn’t felt lonely at all
– She now sees nice things about herself
– Feels pretty in control in the moment
– 1 to 2 glasses of wine per day; there are two alcohol free days a week.
– Every now and then she wakes at 4.30am, but now can go back to sleep. Still takes sleeping pill at night.
– No headaches other than from dehydration.
– No hearing difficulty

6-JAN-09 Patient contacts me asking if dose could be taken daily again as some symptoms start to return.
Prescription: Cocculus 30 once daily. Depression and Insomnia – A Case Report 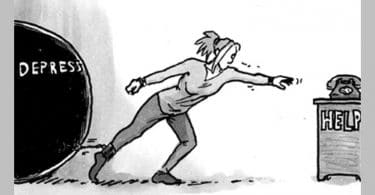 Depression, Suspicion, Cough in a Woman of 35 Severe Depression & Psychotic Symptoms in a Man of 44