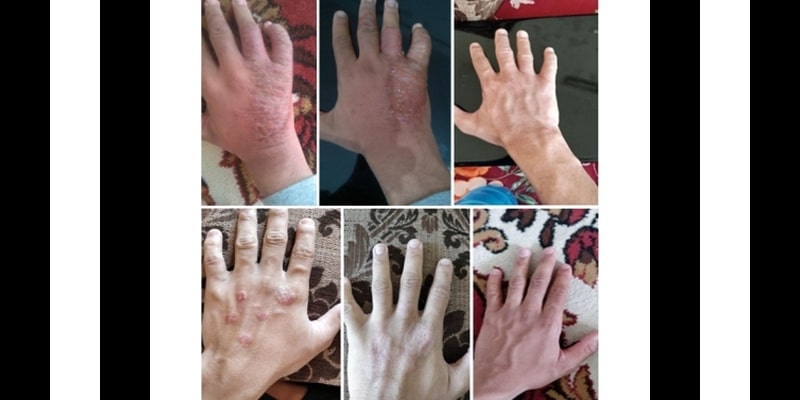 Dr. Zainab Khambaty Tajir presents a case of eczema in a man of 21. Lamenting because he is not appreciated, was the rubric that led to the simillimum.

A 21-year-old male pharmacy student residing in Pune came with complaint of eczema (Homeopathy for Eczema) at the back of his right hand. Swelling and pain were associated complaints which made it difficult for him to write. There was tremendous itching which would then result in bleeding and discharge of yellowish pus. The itching would be aggravated after bathing and he would develop redness on exposure to the sun. He belonged to a small village near Madhya Pradesh. His complaints started after he shifted to Mumbai for his further education. He did take allopathic medications while he stayed in Mumbai for 2 years during his Junior College and his complaint subsided only to recur after a period of time with an increased intensity.

He said the transition in Mumbai was difficult for him. It was a new environment, and everyone was very competitive. It was strange for him. He would always stand amongst the first 3 in his hometown and thus here he was  afraid during his exams, that if he doesn’t score well, everyone would make fun of him. What would people say about him. He would be embarrassed.

His friends would taunt him in a sarcastic way and try to show him that they are better than him. He wanted everyone to say nice things about him, and if he wouldn’t score well that wouldn’t happen.

He also developed a performance phobia. He would shiver when he had to talk in front of a group of people. He would fear saying something wrong and everyone laughing at him. He would feel very embarrassed.

When I enquired about his nature, he said he was very curious about everything. He wants to know everything and always be first. He doesn’t like to be wrong and when someone points a finger at him, he feels embarrassed. He wants to have innovative knowledge that no one else has.

He said that after he finishes his education he wants to work in a big pharmaceutical company and wants to be a manager there. It is important for him to have status.

Appetite – Normal. But cannot tolerate hunger. He gets angry when he is too hungry. There is nausea after eating with heaviness in the abdomen

Sleep – Good, but he startles during sleep.

He feels suffocated in small spaces and gets nauseated when travelling in closed vehicles like cars or A/C buses. After repertorizing, I read the remedy from Dr Sankaran’s Soul of Remedies

As the case matched the description of the remedy, I prescribed Sulphur 200 (single dose) followed by SL for 15 days.

He had his exams the following week and said that his pain and itching were much better. He could write his exams well. However, the eczema had started to ooze more. The swelling had slightly reduced.

Continued with SL for the next 15 days.

2nd follow up : He said that the itching and pain were much better and even the oozing was better now. Continued with SL.  He kept getting better with every follow up. And had almost recovered within 3 months of treatment. The patient was completely fine and he stopped treatment. He came back again in December 2018 with the complaint of eczema at the back of his left hand. There was no swelling or discharge this time.

It was nummular eczema with intense itching <bathing after and <after sweets. Since SULPHUR had helped him the first time. I prescribed SULPHUR 200 (single dose ) followed by SL for 1 month.

He called me after 15 days saying that nothing was better. His itching was very intense, and he got a small lesion near his ring finger too.

I asked him to come for a re-case taking.

During the re-case taking, the Sulphur traits in him were still very strong. The embarrassment, feeling of being put down, inquisitiveness and the need to know it all.

Also there were a few other associated symptoms this time:

He also mentioned an incident that happened in college which had affected him a lot. He had participated in a group project and worked really hard for it but he was disappointed that he did not receive adequate appreciation that he thought he deserved, whereas his colleagues were praised more. His mother said he kept talking about it for days.

On repertorizing the case:

The remedy Calcarea stood out to me- since the Sulphur element was clear, but also the associated symptoms were covered by Calcarea.

Further, the rubric “lamenting because he is not appreciated” was the exact description of the incident and confirmed the remedy.

The patient reported that he was better. His itching had decreased and the lesions were better as well. I prescribed SL for 1 MONTH.

His complaints got better with every follow up. His sneezing and tiredness reduced as well.  Within 3 months of the remedy he was absolutely fine and stopped his medication. I called him on the 26th of September, to enquire about his health and he said he was absolutely fine and had had no complaint ever since.

Update: As of January 6, 2020 the patient is still symptom free.

Lessons from the case:

According to aphorism 162, when the remedy selected is not the exact simillimum but the part of the medicine is similar to the portion of the disease, it will remove the similar suffering. But at the same time, we cannot expect a complete cure.

SULPHUR was a partially similar remedy, hence helped the patient the first time but the symptoms reappeared. It was only a complete simillimum that led to a complete cure Dr Zainab Khambaty Tajir completed her graduation in 2015 from Dhondumama Sathe Homeopathic Medical college, Pune. She then pursued her Masters in Advanced Homeopathy (MCAH) from the Other Song Academy in Mumbai. Inspired by the importance of psychology in treating patients, while practicing homeopathy with Dr. Meenal Sohani, a consultant at Prana Centre in Pune, she then decided to pursue her Post Graduate Diploma in Psychological Counseling (PGDPC). She has now been practicing in Pune at “Raj Homeopathic Clinic”. Visit Dr. Tajir at her website: www.rajhomeopathicclinic.blogspot.com