The patient repeats themes of perseverance, learning to fully express herself, “pushing through” limitations, feeling alone and isolated, “extricating” herself from a “box”, the challenge of transitions and spiritual transformation.

I have fatigue, no stamina. It takes me a long time to feel focused after waking. I have type 2 diabetes. About four years ago I started having foot pain. Something happened in my foot, but I kept on walking.

I like physical challenges. I push myself, I like the feeling of pushing through, the feeling that I’ve mastered my body. It’s more about finding out what I’m capable of–challenging the limits that have been set.

There’s some unsteadiness on my feet. I feel vulnerability–a sense of my body’s frailty is very present.

My children just left the nest. I have to figure out what to do with all that time and energy, something’s that meaningful. Big stuff is being taken away, I feel like I’m being cheated.

I was widowed fourteen years ago. It was a freedom for me, a liberation, I could express who I was. I’m always afraid to step into my whole being. I fight really hard to not go back to the place of not fully expressing myself, not being fully myself.

The work I do is to help others overcome the adversity they’re facing. I help them overcome the challenges in their life, to reach their dreams, to go beyond their potential. I love the idea of transformation, for example, the whole idea of restorative justice for both victims and perpetrators.

When I leave work I instantly feel the pain in my feet. The place where I live limits me, there’s no connection to nature. That’s what I feed off of, how I get rejuvenated. I’ve always been attracted to plants. The home we have limits and angers me.

My family set very clear limits as to who and what I should be. I challenged those limits, and then my mother would tie me to a tree. Religion didn’t allow for freedom of expression. In my first marriage, I couldn’t challenge those limits. Two years after my husband’s death I came out of the fog, and then every limit was challenged.

Practitioner: Can you describe more about limits?

Limits have to do with authority, “conventional wisdom”, someone or something outside of myself. For me to be any other way (than what they expect) challenges them. It’s imperative to them that I remain in a box.

I think ‘I’ll prove you wrong’. I’ll push myself beyond the limits you’ve set for me, the limits are a challenge. It’s always felt as though the limit was someone telling me something I couldn’t be, it challenged me to be something different.

I think ‘let the walking be who you are rather than the pain’. The pain is the box. The box is dark, shadowy. ‘Let me out!’, it makes me want to lash out. I was not able to say to my mother ‘this is who I am’, I wasn’t able to express it.

I was not allowed to express myself, my voice. The box felt like ‘Let me out!’, I always feel like I want to do this (makes gesture of arms pushing out). I feel bound up, captive, can’t escape. It’s still true today, I haven’t totally extricated myself.

It was a paradoxical existence. I felt bound up by my mother when she was beating me, but then I’d go outside and I’d be free, I could breathe. She’d always keep me imprisoned in this dark thing, I could barely breathe. Everything outside of her and me would become blurry and gray.

In my first marriage I didn’t feel free to express myself. He had an explosive temper, he was dangerous, but never towards me. If he was angry, he’d withdraw, and I didn’t want him to withdraw.

I was walking a spiritual path he wasn’t interested in. It was a whole part of my life he wasn’t involved in. That part was vibrating, on fire, getting my attention. I’d be afraid to talk to him, because if he’d withdraw I’d be back in that place where I was alone. It was dark, very sad, a lack of physical touch, emotional warmth, not being loved.

I have a recurring dream of “end times” where I’m separated from my husband and children. My father’s reassuring me that I’ll be re-united with them, but I’m not always confident he’s right. We’re supposed to be together, and there’s a fear of my children experiencing it alone.

My second marriage reflects who I’ve always been but haven’t been able to express, it’s been a challenge. Sometimes my kids would feel I’ve chosen my husband over them, or that I’ve made certain decisions because of him. They’re starting to understand ‘this is me’.

It makes sense, when they were younger, I was limited, and now I’m only limited by “me”. My kids have definitely wanted to keep me in the box, but it hasn’t felt threatening. They’ve tried hard to keep me in a place that feels comfortable for them. It’s been tiring, but it hasn’t felt unloving, even when it was blatantly clear that it was about their issues. They don’t have authority over me, but they can make it difficult, and there are moments when they try to do that. Now it’s my body saying “you can’t do this”. I want to get out of this body; I want to get out of what’s stopping me.

Practitioner: Any dreams of running, swimming or flying?

I’ve had many dreams of flying- I’m gliding and can determine when I want to fly or not. I know how to do it and I wake up thinking I can do it.

Assessment: The patient repeats themes of perseverance, learning to fully express herself, “pushing through” limitations, feeling alone and isolated, “extricating” herself from a “box”, the challenge of transitions and spiritual transformation. She also describes how many times after dreaming she wakes up in the morning and believes she can fly.

The remedy helped in all sorts of wonderful ways. I have lots of energy; I can stay up late at night. I’m not hitting a slump during the middle of the day.

I’m able to focus and concentrate better; cognitively I’m much stronger. I have a sense of humor; I’m not feeling depressed.

The foot pain pisses me off, but it doesn’t bother me in the same way as it did before. The character of the pain is different, it’s not the pain in the past that would take my breath away.

There are extended periods of time where I’m not feeling pain. In the past, it was more “needles and pins”. Now it feels more structural, like bone and muscle.

I’m feeling much better. The blood sugar is still slightly elevated, but I’m not exercising. It improves on days that I do.

Things are much calmer all the way around. I’m not as distressed; I’m more balanced. I’m not being sapped of my energy the way I was before. It feels good to be back. In the past I felt lost, as if I was walking around in the dark.

I had a dream where I met my previous husband. It was very freeing, a lot of “baggage” was released. He told me I’d be working with people who would be passing over.

Assessment/Plan: This patient’s initial complaint related to her foot pain, and yet her perception of the pain was that it posed a limitation and a sense of frailty. Her reaction was to persevere ever more strongly through the limitation. At times she felt drawn back into the “box” (cocoon), and at other times she worked very hard to extricate herself towards freedom.

The butterfly is a universal symbol of transformation, and it does so by emerging from the isolation and limitation of the cocoon. The monarch is also known for its tremendous endurance and perseverance during migrations covering thousands of miles.

After taking the LM 2 for two months, the tension between the feelings of limitation vs. freedom had lessened, and the patient experienced improvements on physical, mental and emotional levels. The remedy strength was increased to LM 3. After another two months the remedy strength was again increased to an LM 4, which she takes as needed. She’s experienced continued improvements over the course of the past eight months, and has needed no further follow-ups up to the present time. 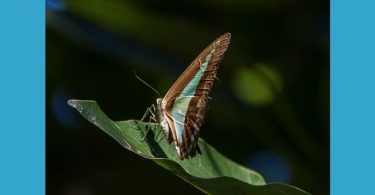 Evolutionary Remedies in Homeopathy: Capturing the Essence of the Butterfly A Case of Scarlet Macaw