Dr. Sandeep Sathye presents a case of acute dacryocystitis in a woman of 49. Belladona, Hepar sulphuris, Pulsatilla and Natrum muriaticum were given at different times as the clinical picture indicated.

Acute dacryocystitis is an acute inflammation of the lachrymal sac arising from blockage of the nasolacrimal duct. Treatment in modern medicine involves the use of topical and oral antibiotic,s but some patients may have sensitivity or resistance to it. Homoeopathy has medicines for this condition. A case reported was a female aged 49 years with complaints of severe pain and swelling in the lachrymal sac on the right side. Belladona 200C, Hepar sulphuris 200C, Pulsatilla 30C and Natrum muriaticum 30C were given at different times as per the clinical picture. The condition resolved considerably within 2 weeks. Photographs taken during follow-up visits document the effectiveness of homoeopathy in acute dacryocystitis.

Inflammation of the lachrymal sac is known as dacryocystitis. It is common among females over 40 years of age [1] and in persons with poor personal hygiene and recurrent inflammation in the nose, sinuses and conjunctiva.[2] It may be acute or chronic in nature, however the chronic variety is more common. Dacryocystitis is caused by obstruction of the nasolacrimal duct. The  patient presents with symptom of watering (epiphora) from the eye in the early stage. If this symptom continues, then accumulation of secretions and tears in the lachrymal sac get secondary infection and this results in mucopurulent discharge from the lachrymal sac. Acute dacryocystitis usually follows chronic infection and results in lachrymal abscess. Skin over the sac become red and swollen which may extend rapidly to involve the lower lid and upper part of the cheeks. The patient usually has severe pain and a feverish sensation. If it bursts spontaneously, pus continues to discharge and may result in a lachrymal fistula. [1]

In modern medicine topical and systemic antibiotics and oral non-steroidal anti-inflammatory drugs are prescribed to reduce inflammation and control infection. However, some patients are either sensitive to antibiotics or have developed antibiotic resistance due to its inadvertent use. Various studies support that homoeopathic treatment is equivalent in effectiveness to antibiotics for certain human infectious diseases. [3]  Homoeopathic medicines are mentioned in the literature for the treatment of dacryocystitis. Below is a case report with photographic evidence during follow up visits showing the effectiveness of homoeopathy in acute dacryocystitis.

A female aged 49 years reported on 26 March 2016, to the outpatient department of the institute with the complaints of watering from the right eye for the last 3 months and pain with swelling between the nose and eye for the last 2 days. [Figure 1] She had no history of ocular injury or purulent discharge from the eye. She is a known case of hypertension and diabetes for the last 3 years, well controlled with conventional treatment. There was an oedema over the right eyelid and a swelling over the lachrymal sac. On examination, the sac area was very tender and hard in consistency. There was a mild conjunctivitis and no abnormality on the cornea. Vision was 6/6 on Snellen’s chart.

The homoeopathic medicine Belladonna 200C one dose was given immediately as there was a severe tenderness and after 4 hours Hepar sulphuris 200C was advised every 2 hours for 2 days as the sac area was extremely sensitive to touch and erythematous.

On March 28, 2016, there was a reduction in pain, lid swelling, skin erythema and tenderness, however hardness over the lachrymal sac was not much reduced. The same medicine was continued with the same dose.

On March 30, 2016, there was no further reduction of lid swelling and pain. On examination tenderness over the sac had not subsided completely and hardness over sac was the same [Figure 2] Homoeopathic Pulsatilla 30C was prescribed in QID dose for 2 days. Norton AB has mentioned that “no remedy is more frequently needed in early stages of acute phlegmonous dacryocystitis than Pulsatilla”. [4] On April 2, 2016, there was much reduction of swelling of eyelid and pain. [Figure 3] On examination there was no tenderness over the sac and swelling over the sac had reduced. The same medicine was continued with the same dose for the next 4 days. On April 6, 2016, there was no swelling of the lid, no pain about sac region and the eye was looking almost normal. [Figure 4] On examination there was no tenderness or hardness over the lachrymal sac, however there was regurgitation of watery discharge from the lower punctum of eyelid. Homoeopathic Natrum muriaticum 30C was prescribed in TDS dose for four days based on aetio-pathology of this condition. Stricture of the nasolacrimal duct is the basic cause of dacryocystitis and Norton AB has mentioned use of Natrum muriaticum for stricture of lachrymal duct. [4]  The medicine was given in low potency as the prescription was based on pathology. On April 25, 2016, there was no escape of fluid on pressure over the sac and the eye was looking normal, so the medicine was discontinued.

The homoeopathic literature mentions medicines for acute dacryocystitis, however a published case report with photographic evidence was lacking.

This case presented with photographic evidence clearly shows that homoeopathy can effectively manage acute infections like dacryocystitis without intervention of modern medicines. However, to achieve good results, detailed knowledge about aetiopathogenesis of the condition is required to select the proper medicine. 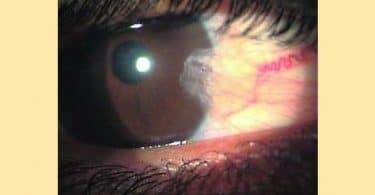