(Editor’s Note:  As of August 2020, these two cases were fully confirmed high and very high positive for igG antibodies with the last generation test of Abbott Laboratories. )

Abstract: The author presents two cases of febrile respiratory infection with high covid-19 probability (due to epidemiological and clinical evidence) who recovered fully following classical homeopathy treatment.
The high covid-19 probability was due to epidemiological and clinical evidence. Both patients recovered fully following classical homeopathy treatment.
A couple – a man and a woman, both developed respiratory infection symptoms during and after a trip to Paris, returning to Athens in mid-March 2020. They both traveled to Paris on business, visiting overcrowded places (international trade fairs) and the busy relevant airports.

CASE 1
The first patient was a 37-year-old man with no diagnosed serious systemic diseases, who was in good general condition. The patient developed the first serious symptoms while he was still abroad, with a severe headache and a runny nose accompanied with fatigue; on his first day back to Athens, he developed a high fever (39.3 °C) with chills and malaise.
The fever (up to 38.5 °C) persisted for several days, often with chills and a severe concomitant dry cough {++}, (mainly during the day, worsening at the slightest movement {+++}) and occasionally with slight breathlessness. The patient also had a sore throat with a burning pain (worse on the left side), a feeling of heaviness behind the eyes, complete exhaustion, as well as a great mental distress and a fear that something very serious might happen to him {+++}.
His sleep was restless {++}; he was tossing and turning, unable to fall asleep, often getting up and lying back down with severe chills. Anorexia and thirst {++}, with sips of water from the tap. White coating on the tongue.
On the first day the fever appeared, he contacted his physician and received treatment (clarithromycin 500 mg every eight hours) which he discontinued himself after three days of no improvement, and after associating the antibiotic treatment with diarrhea (without abdominal pain) that he developed.
On the eighth day of illness (and upon seeing the great improvement in his partner’s condition, who had already started homeopathic treatment) he decided to initiate homeopathic treatment himself. On the first day, based on the aforementioned symptoms (Repertorisation fig 1), he received Arsenicum 200CH (TID/one day). 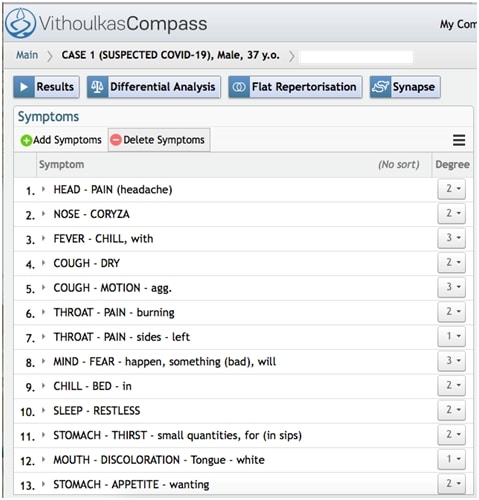 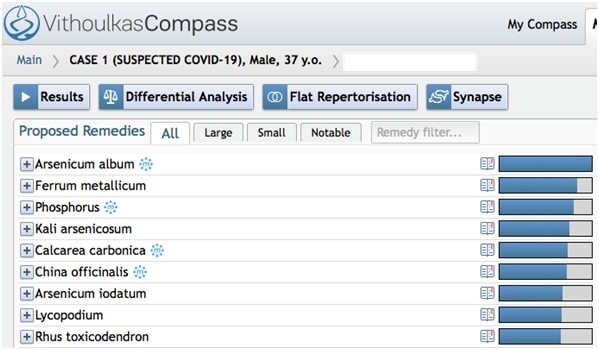 From as early as the first twelve hours post treatment, the patient reported a clear improvement of his general condition (and a mental “wellbeing”), and after 36 hours, a clear drop in fever (37.5 °C max.)
At 48 hours, he had a low-grade fever but his cough was exacerbated, emerging as the major symptom, worsening during the day and at the slightest movement {++++} (even with breathing), and he developed an excessive thirst {++++} (the patient reported drinking 30 to 40 glasses of water daily from the tap!) (Repertorisation fig 2) 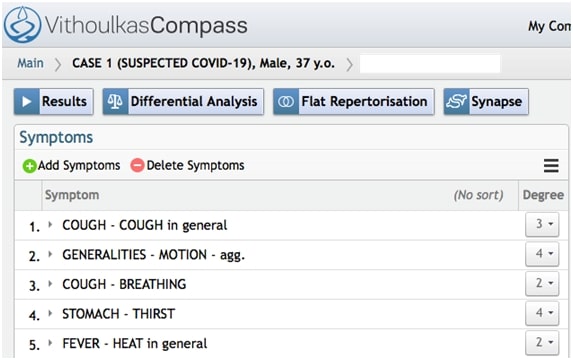 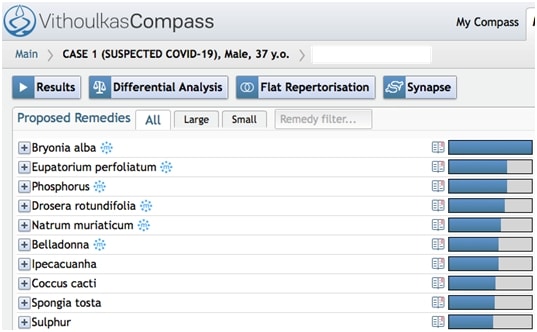 Repertorisation fig 2
The patient received Bryonia 200 CH (TID/one day) with a clear improvement in the cough and a significant decrease of the thirst. After 24 hours (on the fourth day of treatment) and even though he was feeling much better, his condition suddenly deteriorated, developing high fever (39.6 °C) and a new exacerbation of the cough with a rapid heartbeat, slight breathlessness and a feeling that “something would happen to him”. Responding to a question by his treating physician, he reported a history of panic attacks (4 to 5 episodes a month until recently, before the infection).
The patient received Aconitum 1M, one globule, and the next morning he had a dramatic improvement with a temperature of 37.5 °C and a clear reduction in other symptoms; he received one more dose of Aconitum 1M and a further one in the evening.
The next morning, he woke up feverless with symptoms having almost completely resolved (including diarrhea which had persisted up to that point) with the exception of a slight cough. He now had a very good appetite. From then on, he didn’t receive any further homeopathic remedy and three days later he reported having almost completely recovered, feeling only slightly weak but being in a very good mood (much better than he was before the infection).

CASE 2
The second patient was a 31-year-old woman in good general condition, without any diagnosed serious systemic diseases. She had already started a homeopathic treatment two months before for mental issues (melancholy and emotional instability, and she had taken Ignatia 200CH and Ignatia 1M).
She was the partner of the aforementioned man, and she had traveled with him, following the same trip patterns. The woman developed the first serious symptoms three days after her partner, with a 39.2 °C fever (it had been years since she had last developed a fever) and intense concomitant musculoskeletal pain throughout the body {+++} (the most bothersome symptom, according to her), a dry cough {++}, a slightly sore throat, a runny nose, a complete loss of taste and smell {+++} and anorexia, as well as semi-solid stools (without abdominal pain). Thirst for cool water was normal. She felt exhausted {++} without any restlessness or fear. The patient talked to her physician from the onset of the fever and received Eupatorium Perfoliatum 200CH (TID/ one day) (Reportorisation fig 3). 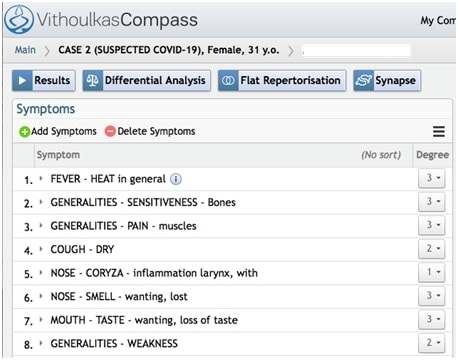 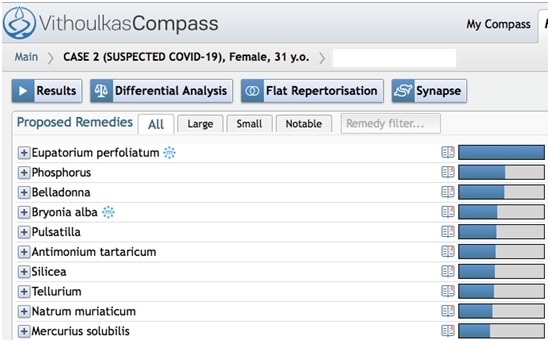 Repertorisation fig 3
After 36 hours, she felt better with the fever dropping significantly (37.5 °C) and an improvement of the musculoskeletal pain (she discontinued Eupatorium after having taken 5 doses). She was now exhausted, with no appetite and no sense of smell and taste.
The following day (third day of treatment), the low-grade fever and the bouts of dry cough persisted, and the patient reported nausea, a “tight” stomach and slight breathlessness. Mentally, she felt trapped in the house and like running away. She received Ignatia 200CH (one dose) with an immediate improvement in the cough and the breathlessness.
After approximately 36 hours (fifth day of treatment), the patient still had a low-grade fever and reported a new sudden deterioration of the cough and a mild breathlessness along with a heaviness in the precordial region {++} and a rapid heartbeat. Mentally, she was quite scared {+++} that something might happen to her, maybe something heart related. (Repertorisation fig 4) 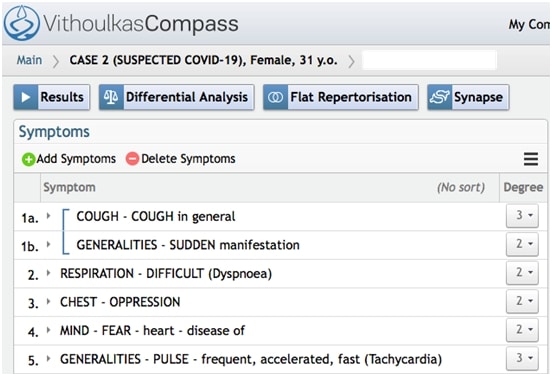 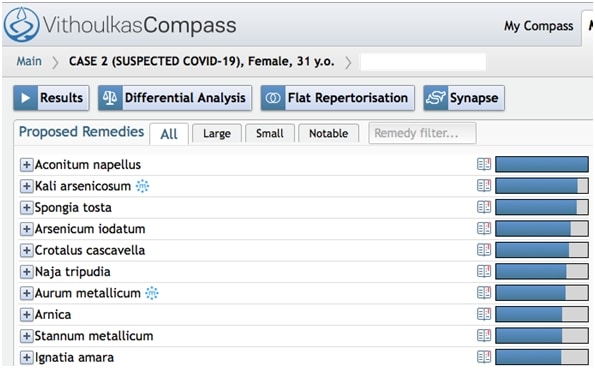 Repertorisation fig 4
She received Aconitum 1M (one dose) with an immediate improvement in all her symptoms. On the next day (sixth day of treatment), the patient was feverless with very little cough and an improved appetite, while for the first time she felt like her sense of taste and smell were coming back.
Mentally, she felt much better, calmer and optimistic. She needed to rest, and she slept for many hours. Homeopathic treatment had been discontinued (she had received 4 doses of Aconitum 1M in total) three days before and the patient was feverless and feeling well, without symptoms except a mild fatigue.

Conclusion: Both the above-mentioned cases had a good outcome following classical homeopathic treatment. Naturally, whereas a COVID-19 infection is highly suspected due to the clinical and epidemiological evidence, it cannot be demonstrated without a positive diagnostic test for SARS-CoV-2 antibodies, which is expected as soon as it can be carried out.
In any case, homeopathy’s therapeutic competency against this particular viral infection seems to be remarkable. This is also consistent with the first clinical experiences as well as past data, whether they involve seasonal influenza and a host of other viral infections or historical information such as the successful homeopathic treatment of the Spanish flu.
It would be in the best interest of the health of humankind if the potential of classical homeopathic treatment could be scientifically evaluated, transposing it into proper clinical application in the COVID-19 pandemic, for instance in the setting of a NHS clinic regardless of case severity, and possibly in combination with other therapeutic approaches without compromising the safety of patients (due to the lack of side effects of homeopathic remedies in conjunction with the fact that other treatment options would be available to them).
This way, statistics could help provide a clear assessment of what we believe is the great therapeutic potential of classical homeopathy in combating COVID-19 infection, but primarily in the protection of human health, with further invaluable social impact (even in public finances and the wider broader economic activities).

The results of Anti-SARS COV 2 IgG: Dr. Vassilios Zinas, MD was born in Athens Greece in 1966. His got his higher education in Athens and a Bachelor’s degree in medicine in 1994, after six years of studies at the Medical School of the University of Rome. He specialized in internal medicine in 2008 after working five years at Sismanogleio Hospital of Athens. He has studied classical homeopathy since 1993, following mainly the teaching of Professor George Vithoulkas (International Academy of Classical Homeopathy in Alonissos and EEOI in Athens). He has been practicing classical homeopathy over fifteen years and was involved in various teaching activities. Dr. Zinas is an ex-board member of EEOI (member of LMHI and ECH).