The word philosophy comes from the Greek φιλοσοφία (philosophia),  which, quite literally, means “love of wisdom”. In a broad sense, it is the task of understanding fundamental truths about ourselves, and the world in which we live. Most people live their lives without occupying themselves with deep philosophical problems. Yet, every one of us has a philosophy, for it is a way of looking at the world and distinguishing right from wrong.

Many great minds throughout history have labored with more complex issues and the construction and analysis of reasons and arguments. Immanuel Kant was one of them. The quote “sapere aude, incipe” is from the Latin poet Horaz, and Kant used it in his famous essay on answering the question, “What is enlightenment”, written in 1784:

Enlightenment is man’s release from his self-inflicted tutelage. Tutelage is man’s inability to use his own understanding without the guidance of another. Such tutelage is self-imposed if its cause is not lack of intelligence, but rather a lack of determination and courage to use one’s intelligence, without being guided by another.

Have courage to use your own reason! That is the motto of enlightenment. With this critical maxim, Kant was one of the most important thinkers of the “Age of Enlightenment”. During 18th century, philosophy and the development of the natural sciences had a deep influence on medicine. They gave stimulus to the first “modern” approaches in medicine, which included a reorientation of pathology, the beginning of experimental physiology and clinical medicine, to name a few.

Hahnemann lived during the Age of Enlightenment. He was obviously familiar with Kant’s writings and possibly felt inspired by him. Kant wrote:

“No matter how hard we try, we are therefore never going to know what the world is like per se, but only how it presents itself from a human perspective.”

Like Kant, Hahnemann also refused to speculate about the essential nature of things, beyond our sense perceptions: “The physician can never see the spiritual being, the vital force, that creates the disease, and he never needs to see it. In order to cure, he only needs to ascertain and perceive its morbid effects… The unprejudiced observer – well aware of the futility of transcendental speculations which can receive no confirmation from experience – be his powers of penetration ever so great, takes note of nothing in every individual disease, except the changes in the health of the body and of the mind (morbid phenomena, accidents, symptoms) which can be perceived externally by means of the senses, … and which represent the disease in its whole extent, and together form the true and only conceivable portrait of the disease.”

Hahnemann founded his medical philosophy on vitalism, naturalism, and humanism. He set standards for the homeopathic profession, providing a detailed and analytical description of the homeopathic theory and its practical application in the Organon.

Sapere aude was the battle cry of the Age of Enlightenment, and the slogan Hahnemann used as a subtitle for the Organon since its second edition. With following Horaz’ slogan Hahnemann also lived up to the credo of his school in Sankt Afra to Meissen, where it was written on the southern portal, and which proved the overall concept of a humanistic education and upbringing of this school.

Medical enlightenment, based on Kant, can be defined as man’s release from his self-inflicted tutelage with regard to things that are related to his mental, emotional, and physical well-being.

In medicine also, a great difficulty lies in motivating people to emancipate themselves. Kant rightfully lamented: “It is so easy not to be of age. If I have a book that understands for me, a pastor who has a conscience for me, a physician who decides my diet, and so forth, I need not trouble myself. I need not think, if I can only pay – others will easily undertake the irksome work for me.” The ‘step to competence’, Kant opines, ‘is held to be very dangerous, by the far greater portion of mankind’.

Almost 300 years after the beginning of the Age of Enlightenment, orthodox medicine still remains based on a mechanistic approach, it being neither logical, based on facts, nor demonstrably true. Despite sophisticated diagnostic techniques and achievements in first aid and surgery, it remains in the dark, in the true curative treatment of diseases. The negative effects from the dependency on drugs, their side effects and toxicity, as well as the suppressive effects of palliation, often outweigh the benefits. Hahnemann already complained that more patients die of their medical treatment, than of their disease. Considering the horrifically bleak medical philosophy and practice in his time, it is not surprising that he was dissatisfied with his inability to provide effective medical treatment, and sought a rational healing system.

The patient’s self-inflicted tutelage is often due to laziness, or due to the lack of resolution and courage. But it is also frequently based on lack of political freedom, social or intellectual inhibitions, or other restrictions imposed by society.

Maybe it is a good idea to give our patients a copy of the Organon, to motivate them to shake off their immaturity, as Hahnemann did. Everybody should be able to live a healthy life by virtue of his own understanding. Dare to be wise. Begin now!

Besides Hahnemann, many other homeopaths have contributed to the development of the homeopathic healing system, based on their observations and experience. One of them was Cyrus Maxwell Boger, about whom we present several articles in this issue, together with other interesting articles. Explore them and let us know your thoughts and feelings: [email protected]

Katja Schütt
Editor
Homeopathy for Everyone 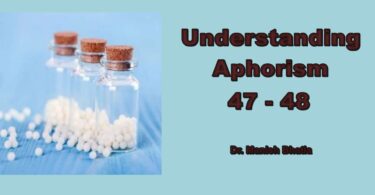