Our readers write in about how they felt about last month’s issue.

I loved Katja Schütt ’s interview with Dr. Klaus-Henning Gypser. I never realized there were so many errors in our reference books! I applaud him on this great project he’s engaged in.

Thoroughly enjoyed The Life of Margary Blackie by Katja Schütt. What a talented, independent and determined woman she was!

Re: the short story contest:A brilliant idea! I’m just reading a novel about Napoleon. It gives a few symptoms he suffered on his campaign, which are found in Arsenicum. As you know he is reputed to have died of Arsenic poisoning while interned.

I love reading the journal but find onscreeen a trial. Is there any way to download to Kindle for portability?

I was interested but not very impressed by the article in last month’s magazine about a possible theory of how homeopathy works. Are you not aware of Cyril Smith’s work showing exactly how it works? This has been approved by the National Physical Laboratory and I cannot understand why people are still saying that we do not know how it works!

I totally agree with you. I always wondered why there was no movie about Hahnenemann’s life. This might be very very interesting. But it would be necessary to include in this adventure big studios.

I am really very much impressed with your initiative. Nobody so far has thought about this concept, at least I have not come across! I will surely participate. I am based in Mumbai, India and I will write a story at the backdrop of Indian society.

Thanks for the fabulous idea!

I am not at the moment entering this contest but I thought I might let you know that in my collection of 9300+ volumes on homeopathy there are 70 categorised as fiction. Some date back to the C19, some are fictionalised accounts of Hahnemann’s life, some are detective thrillers, some are romantic novels, there is a biography of JD Salinger, a huge variety. A few weeks ago I decided to write a review of this category but I have not got very far yet.

Good luck with the contest,

My husband and I love this challenge, thanks for the great idea!

Jo caught a bad cold through neglect…. and after an energetic rummage from garret to cellar, subsided on the sofa to nurse her cold with arsenicum and books.

“He (the doctor) said it was dead (from scarlet fever)….. he turned round, all of a sudden, and told me to go home and take belladonna right away, or I’d have the fever.”

“No, you won’t!” cried Jo, hugging her close, with a frightened look. “O Beth, if you should be sick I never could forgive myself! What shall we do?”

“Don’t be frightened, I guess I sha’n’t have it badly. I looked in mother’s book, and saw that it begins with headache, sore throat, and queer feelings like mine, so I did take some belladonna, and I feel better,” said Beth, laying her cold hands on her hot forehead and trying to look well.

I loved it when I first read this after knowing about homeopathy, because I had read it years earlier, and probably just skipped right over that!

Thanks again, we look forward to seeing the results!

There is one book and one movie I have seen and read that talks about homeopathy called ‘Little Women’. They talk about the girl having a belladonna fever and a few other things.

I just received your email regarding the story competition. Great idea. However, in your introduction you said you’d never seen anything published about a homoeopath (fictionally). I once read a novel about a man who fell in love with his homoeopath, her legal difficulties when a child client died, and the complications resulting from all that. Not a great book, but definitely with homoepathy at the forefront of the plot. I’ll try to track down the name, author and ISBN if you wish. Keep up the great work.

Actually, a very well-known writer, Chris Bohjalian wrote a novel with a strong theme in homeopathy, back in 2000. The title: “The Law of Similars”.

I don’t remember how true it was to homeopathy, but I do remember it involved prescribing Arsenicum album and there was an issue with “overdosing” and the resulting aggravations.

Hope this is useful to you.

Excellent idea!! (Short Story) THANKS FOR THE INVITATION!!

Hi, thanks for the information.

May I remind you about the wonderful novel “Little Women”. When one of the “little women” got sick (scarlatine fever), she is given homeopathic remedies by the older sisters.

Congratulations for the contest!

There is in fact a fiction book about the whole topic of Homeopathy called Law of Similars.

Great idea (short story contest)
Just a note that Gabriel Garcia Marquez, whose father was a homeopath, included a homeopath in all his novels.

I am relieved to find your newsletter. We have a small herd of beef cattle in central BC , Canada, and some years ago I decided to treat them with homeopathy. It’s been a steep learning curve and with no homeopathic vets in the area our cows have been true guinea pigs. There is so much to learn. Fortunately there are books and the internet. It is my estimation that we’ve saved several animals from the slaughterhouse with these miraculous remedies. Recently a cow that could hardly walk and seemed generally very sick responded first to Symphytum and then to Gunpowder. Once her leg was working again whatever infection was dogging her responded to the gunpowder. Her irritability prompted me to dose her with Belladonna in between and that too seemed to settle her.

We had decided to put her down and then the gunpowder made a huge difference. She is even putting on weight and we were convinced she must have cancer or some such fatal disease. Now we’ll keep her near and give her a chance to recover completely.

I have just recently started to consider the psychological factors and clues to remedies. It was enough to try to fathom what might be happening physically. However, one very crabby cow who had terrible diarrhea did respond to nux vomica and it was her mood that led me there.

I have a book by Mr. McLeod and one by the NZ homeopath Tineka Verkade which is for dairy specifically, but it has been very helpful. One of our dairy farmer neighbours was having difficulties with mastitis, foot growths and what seemed to be a flu of some kind among his animals so in desperation he asked me if I had any ideas. Based on Ms. Verkade’s mastitis treatment I suggested the Sulphur, Silicea and Carbo Veg combination she uses which addresses the subclinical as well as acute illness. He put it in his water trough and his cows all responded. The infection levels which had been high went way down. He also put Arsen. album in the water for his young ones. They all recovered. Later he went back to conventional therapies, because they are famiiar, they are prescribed by a vet and because he convinced himself the cows would have gotten better on their own regardless of the homeopathy.

I’ve learned to stop talking about Homeopathy unless someone says an animal is dying and then I can’t keep my mouth shut. It’s very frustrating to be faced with such willful ignorance when animals are suffering needlessly.

So that’s the short version of my very long story 🙂 Thank you for giving me the opportunity to tell someone who understands. I’m ready to ascend another rung in the learning ladder and will go now to the behavioural aspects of animal treatment as well as expanding my repertoire to reduce the scatter gun effect.

One last story, we had a very young calf who became quite ill after some cold weather. We brought him and his mother into the barn and I’m not sure what I tried on him to begin with. I think Aconite at first, but he was beyond Aconite. He was not drinking milk, only water and licking the mineral block. At one point I gave him carbo veg and he seemed to rally. Then he relapsed and I didn’t know enough to repeat the treatment and something was telling me to use the strep nosode. I was reluctant in case it did damage, but he was so sick my neighbour came to see him and said he wouldn’t last the day. So I gave him the strep nosode, couldn’t make things any worse. You guessed it, by morning he was on the mend. Drank from his mother, stayed upright longer. I didn’t have to do another thing for him. It seemed like a miracle. He grew into a beautiful young steer.

Excellent article on LMs! Very clear – very concise. Kent has dire warnings re repetition of Thuja in C potencies. Are his views borne out by contemporary experience and practice and should there be any special caution with Thuja in LM?

How did you not find the book “The Law of Similars?” It was probably written about 8 – 10 years ago. Also, Little Women makes mention of homeopathy. When Jo’s sister gets sick (can’t remember her name) they are looking in a repertory for a remedy and they give her Belladonna. Also, Dr. Quinn, Medicine Woman also made mention of homeopathy and so did Big Bang Theory, although both were in a negative context. We need to market to script writers. I’ve often thought that a drama based on homeopathy rather than medicine would be a cool idea.

I am extremely pleased to receive your Oct 2012 Newsletter furnished with several valuable and informative articles. I thank you very much for your kind services to homoeopathy to reach each and every corner of the world. God bless you for your great mission.

Just finished with the Oct. issue. Enjoyed the variety and the extensivity through related posts etc.

I was wondering if you would add a column to the interpretation of mind symptoms in Kent’s Rep. Thank you. 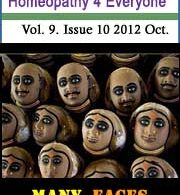 Homeopathy for Everyone October 2012 Reply to Letters to the Editor