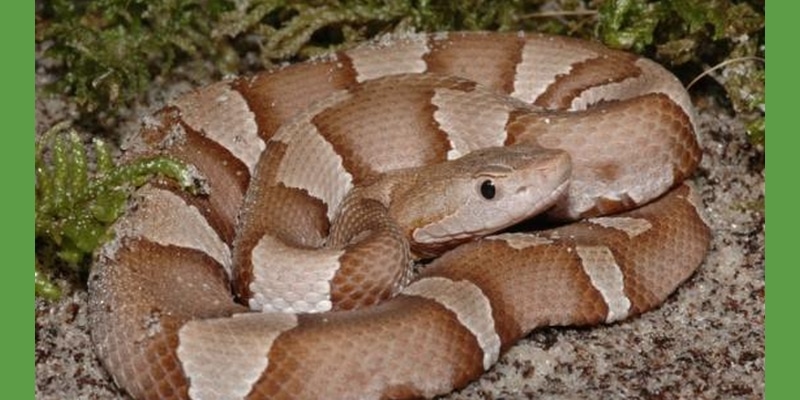 Dr. Vivekananda Chakravorty gives a brief description of the symptoms of Cenchris Contortrix. These include ailments from anticipation, marked, alternation of mood and dreamy absentmindedness.

Abstract: In this article a brief description of the drug Cenchris Contortrix is given. Though well proven, this drug is not commonly prescribed like other snake remedies. The author deals with the main characteristics of Cenchris Contortrix along with some handy and useful rubrics from repertory for therapeutic purposes.

American Copperhead is overall chestnut in color with dark brown bands crisscrossing the length of its rust and copper coloured body hence the name copperhead.

Average adult size is 22-36 inches (56-91 cm), record is 53 inches. They are viviparous, giving birth to siblings. The top of the head in front of the eyes is covered with large plate-like scales. The pupil is elliptical, a catlike vertical slit. There is a deep facial pit between eye and nostril.

The preferred habitat is low, wet areas around swamps, streambeds, river bottoms, and damp ravines, but it also occurs on the hillsides above the wet areas. It is also found in suburban neighborhoods near people.

Copperheads are members of the viperidae (pit viper) family having folded fangs. Most of the bites are accidental, though snake bites are common in North America. It has haemotoxic venom.

The venom of a copperhead is significantly less potent than that of rattlesnakes or cottonmouths [which possess potent toxic venom], but also because they seldom inject much venom.

Copperhead bites are extremely painful but usually not life threatening for healthy adults. They can be dangerous to children or older citizens in poor health.

Like other serpent poisons it has the symptoms of breathlessness, palpitation, fear of sudden death, mental and physical restlessness, anguish, increased sexual desire in both sexes, intolerance of tight clothing.

Mind- Ailments from anticipation, marked alternation of mood and dreamy absentmindedness as if taking the wrong car without knowing where she is going. They are the persons very much fearful of sudden death, which is a common finding of snake bitten persons.

They even have the sensation of death while lying in bed. They predict that they will surely die. Here it resembles Aconite. But Cenchris is more nervous. They are very restless both mentally and physically, very anxious like Arsenic.

Suspiciousness is another feature. Thinks that her husband will put her in an insane asylum, which is more prominent from 3-8 p.m. (proving symptom).

Loss of memory is another feature of this drug. Delusion as if somebody is behind him, delusion of being persecuted. (Another important drug is Medorrhinum ).

Delusion of being persecuted. Another peculiar delusion of Cench is delusion as if the person is in two different places at the same time. ( Lycopodium and silica have the same delusion ).

Generalities-  Sensitivity at the waist has been found in Cenchris. Cannot tolerate tight clothing around waist. (Lach has the intolerance around neck and abdomen too).

Dreams- vivid, frightful, amorous, of being raped, of fire, of snake bites, terrapin (any of various web-footed pond or river turtles of the family Emydidae ), animals copulating, drunken people, indecent behavior of men and women.

< Spring, this is seen in many snake remedies. Of them Lach is very important. Other drugs are Crot-h, Elaps, Naja, Vip which are of snake origin.

< Lying down, evening, afternoon, night, on waking in morning, pressure.

Blue circles around eyes [This symptom I consider as an objective one which is frequently found especially in fair complexioned women, other important drugs are- Chin, Sec etc.]

Sudden sharp stitching of heart, Throbbing under left scapula, sensation of fluttering <3 p.m.with feeling that heart is felt into abdomen. It comes in relation with Lach, but Lach more often affects the left ovary than right.

Cenchris has difficulty in deglutition < on empty swallowing but easy swallowing of both solid and liquid food. But Lach patient can swallow solids but not liquids, which is more painful than solids. Religious affection is pronounced in Lach but not in Cench.

Some important rubrics of Cench-

Anger, irascibility; evening; 6 p.m., 8.30 p.m. – alternating with kindness.
Death; presentiment of; sudden death, of a. Sensation of; lying, while.
Delusion, imagination; asylum, that she will be sent to
Delusion, die; about to; he is
Delusion, people; behind him, someone is
Delusion, persecuted, that he is
Delusion, places; being in different, at a time.
Dreams; animals, of; copulating
Dreams; terrapin, water turtle
Dreams; drunken people
Dreams; rape; seeing, of
Dreams; amorous
Dreams; animals of – Biting him,  Pursued by Wild Snakes,
Snakes, Bitten by, of being.
Fear; of death, of; dream, from
Fear; death, sudden, of.
Helplessness, feeling of; cough, during.
Suspiciousness, mistrustfulness;  Afternoon; 3-8 p.m., Everyone, to,
Sleep- beginning of sleep; at agg.
Sleep- position: side; on: left side; on.
Wounds: bites: snakes; of.
Haemorrhage: blood: non-coagulable.
Food and drinks
Desire- Bacon.
Desire- Cold drink, cold water.
Desire- Fat.
Aversion- Breakfast.

N.B. (1) under the rubric; wounds: bites: snakes; of, other important drugs are Am-c, Apis, Ars, Echi, Lach, Led, Thuj, this drug can be thought of in a given case where past history of the snakebite is present.

In acute cases of poisonous snakebite, it is very important to administer proper antivenom at the earliest.

(3) In regards to sensation of dying I might say that there is one phenomenon called Near Death Experience (NDE) which includes physiological, psychological and alleged transcendental aspects and it has distinct progression as follows

This type of phenomena may be found in a patient who is dying or in the process of resuscitation. And probably these are the delusions a patient might experience in this state.

I’d like to tell you one case of a dog which I took from comparative study on Kent’s Materia Medica by A. Gaskin. “I once had the privilege of tracing up a dog that had been bitten by the Cench and had survived. It was bitten in the region of the neck, and in that region a large abscess formed every spring as long as that dog lived, until old age, when he died of that disease.” Dr. Vivekananda Chakravorty (BHMS) is an alumnus of the National Institute of Homoeopathy, Kolkata, West Bengal, India. He received an extensive theoretical and practical training of homoeopathy from his Alma Mater from 1998-2005. He received training in the management of infectious and acute diseases from an allopathic hospital during his internship. He’s been in practice for 14 years, operating three clinics, treating 200-250 patients monthly. He has a special interest in treating pediatrics, sports injuries and autoimmune and infectious diseases. He treats the local viral, bacterial and tropical diseases. Dr. Chakravorty prefers treating cases by their keynote or core pathological symptoms correlating with the symptomatology of drug pathogenesis. He is interested in treating comorbidities associated with non-communicable diseases. He can be contacted at [email protected]