Appendicitis is a common and urgent surgical illness with variable manifestations, generous overlap with other clinical syndromes, and significant morbidity, which increases with diagnostic delay. No single sign, symptom, or diagnostic test accurately makes the diagnosis of appendiceal inflammation in all cases. Incidence of appendicitis is approximately 1.4 times greater in men than in women.

Incidence of appendicitis gradually rises from birth, peaks in the late teen years, and gradually declines in the geriatric years. Although rare, cases of neonatal and even prenatal appendicitis have been reported.

Variations in the position of the appendix, age of the patient, and degree of inflammation make the clinical presentation of appendicitis notoriously inconsistent. In addition, many other disorders present with symptoms similar to those of appendicitis. These include pelvic inflammatory disease (PID), tubo-ovarian abscess, endometriosis, ovarian cyst or torsion, degenerating uterine leiomyomata, diverticulitis, Crohn disease, colonic carcinoma, rectus sheath hematoma, cholecystitis, bacterial enteritis, mesenteric adenitis, and omental torsion.

The classic history of anorexia and periumbilical pain followed by nausea, right lower quadrant (RLQ) pain, and vomiting occurs in only 50% of cases.

Migration of pain from the periumbilical area to the RLQ is the most discriminating historical feature, with sensitivity and specificity of approximately 80%. When vomiting occurs, it nearly always follows the onset of pain. Vomiting that precedes pain is suggestive of intestinal obstruction, and the diagnosis of appendicitis should be reconsidered. Nausea is present in 61-92% of cases; anorexia is present in 74-78% of cases. Diarrhea or constipation is noted in as many as 18% of patients. Duration of symptoms is less than 48 hours in approximately 80% of adults but tends to be longer in the elderly and in those with perforation. Approximately 2% of patients report duration of pain in excess of 2 weeks. History of prior similar pain is reported in as many as 23% of cases.

An inflamed appendix located in proximity to the urinary bladder or ureter can give rise to irritative voiding symptoms and hematuria or pyuria. Remember that cystitis in males is rare in the absence of instrumentation. Consider the possibility of an inflamed pelvic appendix in males with apparent cystitis.

RLQ (Right lower quadrant) tenderness is present in 96% of patients but is a very nonspecific finding. The most specific physical findings are rebound tenderness, pain on percussion, rigidity, and guarding.

A positive cough sign (ie, sharp pain in the RLQ elicited by a voluntary cough) may be helpful in making the clinical diagnosis of localized peritonitis. Similarly, RLQ pain in response to percussion of a remote quadrant of the abdomen, or to firm percussion of the patient. The

Lymphoid hyperplasia is associated with a variety of inflammatory and infectious disorders including Crohn disease, gastroenteritis, amebiasis, respiratory infections, measles, and mononucleosis.

The best known of these is the MANTRELS score, which tabulates presence or absence of migration of pain, anorexia, nausea/vomiting, tenderness in the RLQ, rebound tenderness, elevated temperature, leukocytosis, and shift to the left.

It includes the following-

The goals of therapy are to eradicate the infection and prevent complications.

TYLER – Special remedies of appendix and caecum – Years ago, when making diagrams to show the action of remedies on parts of the body, one grasped the fact that two drugs seemed to share the honours in this area- Belladonna and Mercurius corrosivus. And one knows that Belladonna has earned a great reputation for early, simple inflammation of appendix. Among its symtoms are : Great pain in right ileo-caecal region. Cannot bear the slightest touch, not even of bed covers. Tenderness aggravated by least jar.(KENT says, “The jar of the bed will often reveal to you the remedy”). Belladonna has much swelling. Its inflammations throb, feel bursting. Kent also says, “There are instances where Belladonna is the remedy of all remedies in appendicitis”.

TYLER – Special remedies of appendix and caecum – Appendicitis : peritonitis. Must keep very still; stools hard, dry, as if burnt. Pain in a limited spot : dull, throbbing or sticking. Bryonia is better lying on painful side, from pressure and to limit movement. Lies knees drawn up. Better for heat to inflamed part.

TYLER – Special remedies of appendix and caecum – (In Repertory for Appendicitis). Boericke says : “It acts on appendix and has been used for appendicitis. But remember, it promotes suppuration, and a neglected appendix with pus formation would probably rupture sooner under its use”. –

BORLAND – Digestive drugs – Apparently, it is a retro-cecal appendix, because they always complain of extreme pain going right round to the back, rather than of pain of McBurney’s Point. It is the type of appendix which is associated with a degree of jaundice. Some of the most striking results from Natrum sulph. have been in cases of appendix abscesses, where there has been a retro-cecal appendix and a tendency for the inflammation to track up and conditions suggesting a sub-phrenic. There is one other rather interesting point about this remedy, and it has no connection with the digestive system. Natrum sulph. is sometimes very well indicated in acute hip joints, particularly when it is the right hip which is affected. The pain is very similar in character to that experienced in cases of appendicitis, and if there are any Natrum sulph. indications, it is worthwhile to consider its use. Two cases in hospital cleared up remarkably well on Natrum sulph., and it is apt to be forgotten for this condition.

KENT – Do not forget the symptoms of Arnica in appendicitis if you know Bryonia, Rhus tox., Belladonna, Arnica and similar remedies. The homoeopathic remedy will cure these cases, and, if you know it, you need never run after the surgeon in appendicitis except in recurrent attacks. If you do not know your remedies, you will succumb to the prevailing notion that it is necessary to open the abdomen and remove the appendix. It is only deplorable ignorance that causes appendicitis to be surrendered to the knife.

“Great pain in the ileo-caecal region; cannot bear the slightest touch, even the bed clothes.”

BOERICKE – Relationship – Compare : Hyd.; Nux.; Rhamnus Californica (tincture for constipation; tympanites and appendicitis and especially rheumatism). Acts on vermiform appendix. Thus has been used for appendicitis, but remember it promotes suppuration and a neglected appendicitis with pus formation would probably rupture sooner under its use.

CLARKE -clinical- Appendicitis. Stitches in the caecum at 7 p.m., alternating with pains elsewhere. This should make it appropriate in some cases of appendicitis. As an external application in the form of compresses, Lime-water has an ancient repute in allaying inflammation of many kinds.

CLARKE –Characteristics – It has rapidly dispelled all inflammatory action in cases of appendicitis; and has removed all suffering in an aggravated case of phagedaenic piles.

CLARKE – – Clinical – Appendicitis. Acute pain in liver extending towards stomach,” though contrary to the general “left to right” direction, is characteristic, as I can testify. Lachesis is also one of the most prominent remedies in appendicitis.

CLARKE – Clinical. – Appendicitis. “Sensitive to music” was observed in one of Nebel’s patients; another had pains in the region of the appendix vermiformis, which should lead to serviceable action in appendicitis cases.

KENT – Yellow, brown spots on the abdomen; petechiae over the abdomen during typhoid fever. Pale face in pleura/peritoneum-disease, red face in articular affections. 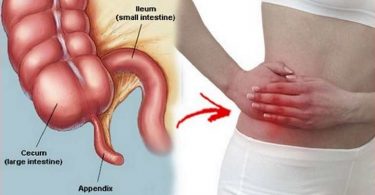 Appendicitis in a Child of Six