Samuel Hahnemann described miasms as predisposition to acquire or inherit certain diseases. The same goes for genetic imprinting. It can be acquired during life or is passed to us by our ancestors. Hahnemann thought of contagious diseases as trigger for miasms, whereas gene imprinting can be influenced by various environmental factors.

In 1865 Gregor Mendel discovered what we now know as the Mendelian laws of heredity. Since then there have been many major milestones on the way to understanding the mechanisms of gene expression, the last being in 2000 when the Human Genome project was accomplished. A compilation of the available information is the impressive database OMIM (Online Mendelian Inheritance in Man), where about 18000 different mutations of human genes are recorded. These genes are involved in the manifestation of hereditary diseases,which concern all medical fields.

Cystic fibrosis (CF) is the most frequent metabolic disease found in Germany (OMIM # 219700). CF is a recessive hereditary disease,which means that both parents are healthy carrier of a mutant gene copy. The risk for having a child with CF is 25%. The gene causing CF is located on chromosome 7. More than 1400 mutations known for this gene lead to a variable phenotype.

This strict correlation between one gene and one disease is true only for monogenic disease like CF. More complex diseases like diabetes or cancer cannot be pinned down to one change in the DNA sequence.

Recently scientists are more interested in learning how the expression of genes is regulated, which includes the mechanisms of epigenetics. In 1942 Conrad H. Waddington defined epigenetics as “the interactions of genes with their environment that bring the phenotype into being.”. Epigenetic modifications are not seen as alterations of the DNA sequence but rather as DNA methylation, non-coding RNA molecules or modification of histone proteins. They act on a higher level coordinating gene expression within a single cell up to the entire organism.

The mentioned epigenetic modifications are seen in somatic cells. The ability of a gene or a DNA segment to be expressed is determined during gametogenesis, which is called genomic imprinting. Although the modifications are reversible, the gene or DNA segment remembers the sex of the parent it originates from. More than 80 human genes are known to be parentally imprinted, their expression depending on their parental origin. One well known syndrome is the Beckwith-Wiedemann syndrome (BWS), which, amongst others, is the result of aberrant methylation of a certain DNA region on chromosome 11. The importance of understanding the role of these epigenetic errors are underlined by recent findings which lead to the assumption that there is an increased occurrence of imprinting errors in children after IVF or ICSI. In Germany 12000 children are born every year after assisted reproduction.

The expression of human growth controlling genes is also regulated by genomic imprinting. With the above mentioned BWS we find gigantism including macroglossy, omphalocele, mostly mild mental retardation and often Wilms tumors. It is remarkably that while the paternal genes promote fetal growth, it is suppressed by the maternal gene copy. Thus there is an antagonistic competition between paternal and maternal genes in the early embryo and only a balanced interaction allows a normal development of the fetus.

The aberrant expression of growth controlling genes also promotes the development of malignancy. There are some gene mutations known to be associated with cancer, although their presence does not necessarily lead to tumor growth. Furthermore the same mutation of the DNA sequence can cause different kinds of tumors. Altogether these facts imply the contribution of epigenetic mechanisms to the control of cell proliferation.

Astonishingly nutrition, medicine and other environmental factors can affect epigenetic modifications of the DNA. If this influence occurs during gametogenesis the alteration is transmitted to the next generation.

A Dutch study regarding the alimentation during World War II shows that women suffering from malnutrition gave birth to children with decreased birth weight. In turn these children too had underweight offspring, which might be due to impairment of genomic imprinting .

A similar effect was observed by Markus E. Pembrey (London) in a study conducted in a little Swedish community called Ã–verkalix. He analyzed 320 persons from three succeeding generations. The outcome of his study shows a correlation between the diet of the parents and the state of health of their children.

The transmission of epigenetic effects from generation to generation is also seen with psychic disorders. Offspring of people who survived the Holocaust suffer more often of depression, anxiety or lack of confidence than other people.

A number of epigenetic effects are already described but we still do not know how the epigenetic modifications themselves are regulated. As the epigeneticist and former professor Richard Strohman (University of California) remarks:
” The key concept here is that dynamic/epigenetic networks have a life of their own – they have network rules – not specified by DNA: and we do not understand these rules. But this is only one level of epigenetic regulation. There is a kind of infinite regress here since we now have to ask, What controls the control of gene regulation?”

Apart from looking from an exclusively molecular point of view at the genome we should also consider that energy might be involved in the process of genome function. In the 1920s the physicist Albert Einstein discovered that matter can be converted into energy and vice versa. To date this aspect is largely neglected in biology. Only a few bold and unconventional scientists like Marco Bischof or Fritz-Albert Popp investigate the role that biophotons play in cell metabolism. Considering the immense number of 100000 biochemical reactions taking place per second in our cells it seems near at hand that they might be controlled by some kind of energy, e.g. biophotons.

At this point obvious parallels to homeopathy can be drawn. Homeopathy is a form of therapy acting on an energetic level thus having a deep impact on our organisms. Samuel Hahnemann described miasms as predisposition to acquire or inherit certain diseases. The same goes for genetic imprinting. It can be acquired during life or is passed to us by our ancestors. Hahnemann thought of contagious diseases as trigger for miasms, whereas gene imprinting can be influenced by various environmental factors.

Miasms can be passed from parents to children without any change in the DNA sequence. According to our present knowledge the only way to transmit genetic information apart from altering the base sequence is through epigenetic effects.

Miasms do not exist separately from each other. Sometimes they mix or transform from one to another. Hahnemann needed only a limited amount of remedies for treating his patients as the miasms were then less complex than they are nowadays. Miasms became harder to cure as people living today are burdened with environmental pollution, the side effects of modern medicine and the diseases of our predecessors.

Homeopathy, as a energetic form of therapy, is able to silence active miasms and thus strengthens our vital force??? Maybe Hahnemann`s “vital force” is the answer to Strohmann`s question of how gene expression is controlled. The presence of a coordinating force acting on an energetic level could be the corresponding equivalent to the material level of the DNA molecule.

Let us discuss the idea of energetically controlled gene expression as a model for epigenetics in the context of chronic diseases and homeopathic therapy. You can write to me at [email protected]

Dr. Gabriele Hickmann studied Biology and human genetics and she had further education to become ‘specialist human geneticist’. She is head of a laboratory for cytogenetic and prenatal diagnosis and genetic counseling. Gabi also took courses in homeopathy and she devotes a great deal of her time to epigenetics. Miasms: A New Look Through Epigenetics – I 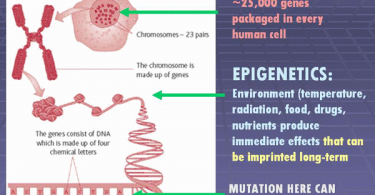 Towards an Integration of Miasm with Epigenetics