Survival – The Reptile by Dr. Rajan Sankaran is reviewed by Laura Sholtz.

This review originally appeared in The American Homeopath  Vol. 17 – 2011

I don’t like snakes very much, and would never keep one as a pet. And once, many years ago while hiking during a drought-plagued summer, I managed to almost lose my right thumb to an ancient tortoise ( picture on p.111 of the book) as he snapped with lightning speed when I held out my water bottle to pour him a drink.  So, not being drawn to reptiles in general, it was not an easy decision to write a book review for Rajan Sankaran’s Survival – The Reptile.  But for an exhaustive education on reptiles, these volumes are well worth reading.

Beginning with H. A. Roberts’ 1936 essay on “ The Characteristics of Individual Animals in Life and in the Remedies,” Sankaran opens the door for understanding “… the voice of the snake …” (p. 14) Most of us probably think of snakes first when asked to name a reptile, so it seems fitting to begin with this essay; in fact, a picture of a snake is the one that is chosen to grace the covers of these books. Sankaran reiterates his sensation method, then moves from a discussion of differentiating issues among the three kingdoms to “…. a more intricate discrimination of related, close remedies.” (p.14) The first part of the book reviews details of Sankaran’s methodology;  “ ….. the energy of the patient has to match with the energy of the source.” (p.30) This is the key.

The section on “Recognizing the Animal Song” expands upon issues and energy patterns in animals, the primary one being survival of the fittest. Other animal issues are: predation, supremacy and territoriality, mating and sexuality, survival skills, methods of attack and defense, social life, communication, freedom and mobility, and rhythm. After “ …. a general introduction to the animal kingdom and an introduction to the class Reptilia….” (p.49), the reader is taken into “….sections on each of the four reptilians orders: Testudines (tortoises, turtles and terrapins), Crocodylia ( crocodiles, alligators, caimans and gharials ),   Squamata ( snakes, lizards and amphisbaenians ),  Sphenodontida / Rhynchocephalia ( tuataras)  … followed by a section on dinosaurs. (p.49)

“The word ‘reptile’ is derived from the Latin word ‘repere’ which means ‘to creep’. This commonly reminds one of snakes and lizards. Interestingly, ‘repers’ also means ‘a groveling or despised’ person….” (p.71), an interesting definition that frequently shows itself in commonly held prejudice. Continuing with the origin of the reptile terminology, “The word snake comes from the Old English word ‘snaca’ and the Proto-Indo-European base ‘snag’ which means ‘to crawl’. The word serpent is synonym for snake, which comes from Old French ‘serp’, which means to ‘creep’. (p.522)

In terms of evolution, reptiles have been extraordinarily successful; in one form or another they have been around for well over 300 million years. “ …. some 6,500 species of reptiles still manage to thrive today.” (p.71) “ The ancestral lineage of both reptiles and amphibians arose during the Carboniferous period, about  300 – 350 million years ago. Although the amphibians continued to evolve successfully   (and are still evolving today), the reptiles were able to move away from the lake and swamps ….  and colonized the land completely. Reptiles evolved to occupy an intermediate position in the evolutionary development between amphibians and warm-blooded vertebrates …” (p.72)

To more easily identify reptilian energy, in addition to describing expressions and behavior, Sankaran offers “Alert” words that reflects the reptilian need to come out … to bask…. that pertain to the reptilian desire for camouflage / remain hidden …. That indicate the reptilian deception …… that pertain to their characteristic sudden attacks / change of behavior….. words that reflect reptiles’ initial fight or flight response to being attacked …. words that indicate the nature and function of the characteristic reptilian dry, scaly skin ….” ( p.s  94-98 ) In addition to all this precise information, Sankaran lists the homeopathic remedies that have been made from each of the four orders of reptiles, including two dinosaurs, Maiasauralapidea and Tyrannosaurus rex.

Continuing the thread of Sankaran’s reptilian theme of “the mysterious and feared,” (p.522) except for the crocodile, there are none more compelling than the dinosaurs. Fantasies about theses ferocious beasts have enamored, entertained, and terrified humans in books, movies and nightmares. The term ‘dinosaur’ was introduced by Sir Richard Owen in 1842. It is derived from the Greek words deinos which means ‘terrible, powerful, and wondrous’ and sauros which means ‘lizard.’” (p.1133) Conjecture on whether birds are descendant of dinosaurs is mentioned ; scientific articles and some paleontologists accept this as fact. “ Everywhere we look, from their skeletal features to their behaviors, to even the microstructure of their eggs, we see evidence that birds are descendant from dinosaurs ….. We don’t even ….. question, whether birds are dinosaurs, they are.” (p.1143)

The bulk of the first volume presents materia medica, pictures, and in-depth case studies of the Testudines, Crocodylia and Squamata orders. Volume two continues with Snakes, Tuataras and Dinosaurs. This is fascinating reading !

Without a doubt, Survival – The Reptile should be in any professional homeopath’s library. It is a treasure, both to read, and to experience a glimpse of Sankaran’s understanding and wisdom in this realm. 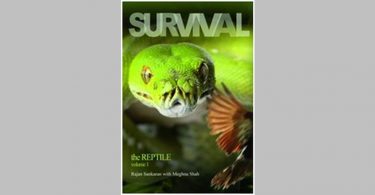 Laura Sholtz, PhD, RSHom(NA), CCH, FBIH, immediately resonated with homeopathy after first learning about it over 22 years ago. She has served on the NASH Board of Directors since 2003 and has been the Registrar for NASH since 2004. Laura currently practices and teaches homeopathy in northern New England, and tutors students for the BIH all over the country.