A marvelous cure of chorea after the author finally perceives the correct remedy.

From: Proceedings of the International Hahnemannian Association –June 1897. A. G., a girl of fifteen, brunette, has been suffering from severe Chorea (Homeopathy Treatment for Chorea) for four years. She was brought to my office supported by an attendant, and with difficulty reached the house from the carriage. The examination revealed the following:

Has been under treatment by several Allopathic physicians constantly for four years, with the exception of a few months during the summer, when the condition is greatly relieved. This relief during warm weather prompted her parents to go to Bermuda, where she was much more comfortable, but on their return to Boston, the affection reappeared in a much more aggravated form than ever. She has been confined to her bed most of the time for the last three months.

In May, 1893, she had her first menstruation, and it has occurred once in two or three months.

Is very irritable, cross and unreasonable.

Desires certain articles of food with great eagerness, and when brought to her, declines them; if urged to eat, she becomes violent.

Motions of arms and legs are constant, except when asleep, but involuntary movements keep her awake an hour or two after retiring. The movements and jactitation are often so violent, that she retains her seat on a chair with difficulty. If asked to grasp with her hands any article lying on the table, she is utterly unable to direct her motions to seize it.

The speech is unintelligible; runs her words together; has very little control over her tongue, and articulates so imperfectly as to be intelligible only to those who are constantly with her.

Deglutition is often difficult; has choked several times when careless in swallowing.

The aggravated attacks have always commenced in the shoulders, going later on to the arms, and then to the legs.

She frequently loses all power to support herself on her legs, and has had many falls.

The Allopathic treatment has been mainly Fowler’s solution of Arsenic, beginning with drop doses three times a day. and gradually rising to sixteen drops, three times a day; Bromide of Potassium at night, or a five grain tablet of Sulphonal, to induce artificial sleep.

The long continued use of Arsenic, during the last year, brought out a rash all over her body, accompanied by intense heat and intolerable itching; this drug was therefore discontinued and increased doses of Bromide of Potassium substituted, with occasional doses of Strychnia, and Quinine.

On account of the mental symptoms, I selected Cina and gave one dose dry.

Report a week later: No change in physical or mental symptoms. Her neck is so weak she can scarcely hold up her head; tongue thick and heavy; is afraid of ghosts at night and must have light and company. Stramonium in water, morning and evening for two days.

Report a week later: Menstruation appeared only ten days late, but is worse in every other respect. 5. L.

Report a week later: No improvement; stumbles and falls; swallowing has become more difficult, especially for fluids; speech is so thick that no one understands her; tongue is very heavy. Much salivation and drooling, with frequent efforts to swallow saliva. Causticum, one dose.

Report a week later: For the last two days some improvement is perceptible in swallowing; the right hand and arm under better control.

Report two weeks later: Walks quite well into my office. Speaks much more plainly; recites a verse of poetry slowly and distinctly.

Report a year later: She has been perfectly well during the year; menstruation regular; not the slightest return of choreic motions and looks the picture of health.

Nearly another year has passed, and the health of the girl is firmly established.

The Homoeopathic treatment of this case commenced in February, and the patient was discharged as cured the following May.

From 1891 to 1895 she had been unmercifully drugged with Arsenic, Bromide of Potassium, Strychnia and Quinine, therefore she was almost constantly under the influence of one or more unsuitable drugs.

This cure with a high potency of Causticum, in a single dose, may be adjudged by our “scientists,” as belonging to the realm of the mystical, and thrown aside with contempt.

Those observers among us, however, who have seen many similar results from the properly selected remedy in its highest attenuations, well know that such cures are possible only with dynamizations, in which no material substances can be discerned by the scales, chemical analysis, microscope or spectroscope, any more than similar examinations of the nerve tissues affected, would reveal structural changes by putting them to the same tests. Post mortem examinations in these cases have revealed to the Pathologist practically nothing, and such are not always conclusive evidence of what really exists in organs and tissues during life.

Dr. Bell—Why did not the doctor give Causticum earlier?

Dr. Wesselhoeft—Well, because he was stampeded. I want to answer that question, for I think it is a perfectly proper one. I myself wonder why I did not give Causticum, but I made a very careful study of this case only after the second visit of the young woman. I thought I had made a tolerably good one the first visit. The child is naturally very amiable, but during these years under the influence of the chorea she became entirely changed mentally. I laid my greatest stress upon the mental symptoms, which I grant you were not fully covered in other respects by Cina. T

Then, on the next visit, this fear of ghosts and this great desire and longing for light, which symptom had never been given to me before, but might have been an older symptom, had certainly come out very much more strongly after the Cina had been given. Upon that symptom, which was again entirely a mental and nervous symptom, I prescribed Stramonium, at the same time knowing that I had not got deep enough—that there must be something else coming to the surface. Then I let her go on Stramonium, as you remember, two weeks. She made a slight superficial improvement.

Then came this tremendous paralysis of the muscles of deglutition and muscles of speech, so that my nose was absolutely rubbed on to Causticum. I do not think it was a very brilliant prescription, but I think the result of the case was a most brilliant one, and it was almost as good as what we have heard here today, “cured while you wait,” by Dr. Allen. Of course such cases as these cannot be cured while you are waiting, but when you consider that from 1891 to 1895 this child was absolutely under the control of this enormous irregularity of muscular action, without the slightest relief; with the most outrageous medication of 16 drop doses of Fowler’s solution three times a day, besides Strychnia, Quinine, etc., it is very much like waiting till you are cured, instead of getting cured while you wait. From February until May that child was under treatment.

I believe if I had given Causticum in the beginning, as Dr. Bell very properly says, I would have gained much time. Nevertheless, think of it for one moment. Think of a case of chorea major existing for four years under the most adverse conditions, with medicinal poisoning continued through that time; think of the fact that with all that tremendousness of medicinal poison, which must have been deep, and still a single powder of Causticum in its highest attenuation acted in spite of all this.

Now we come to the next question, the antidotal treatment. Suppose I should have given the girl the last remedy she had taken, which was bromide of potassium. Could I have found in anything that we know of bromide potassium anything that related to this case? It would have been just as stupid a prescription as if I had given her bromide of potassium in allopathic doses, exactly as stupid. It had no relation to the case; anyone who knows anything of arsenic, knows that this case has not one single thing in common with arsenic. Therefore, why should I have used an antidotal treatment as Dr. Bell suggests? I certainly cannot think that an antidotal treatment, without the slightest indication for the remedy, should be considered for a moment. We ought to have had arsenic symptoms in this case, but we did not have them, because chorea symptoms supervened, the original disease being so enormously strong that the arsenical symptoms did not come. Bromide of Potassium symptoms did not occur either, or any symptoms of the heroic drugs she had taken for four years. Antidotal treatment should always be Homoeopathic treatment.

Dr. Bell—This case shows magnificently the foolishness of resorting to antidotal treatment. I wanted to draw Dr. Wesselhoeft out.

Dr. Leverson—I would like to ask whether in these cases of chorea it is not worthwhile to have the eyes examined. You are all familiar, of course, with the claim of Dr.George Stevens, that muscular insufficiency of the eyes is a cause of chorea, also of epilepsy.

Dr. Wesselhoeft—I think that all of those ideas are exploded—as thoroughly as they can possibly be exploded. Only a little while ago all New York and a little bit of Boston went crazy about cutting the internal or external rectus muscle of the eye for epilepsy. Some in New York said it was a cure for epilepsy. This girl did not have any eye symptoms and I did not think of sending her to an eye doctor. I think there are as many people who could lay claim to saying that she had an irritation of the ovaries and the ovaries ought to be removed.

Dr. Boger—I had come home to me a case of this kind in my immediate family. The patient had chorea major and had been treated by an allopathic physician unsuccessfully. He finally gave her the cold spinal douche, and the chorea promptly disappeared. But in the course of less than two years epilepsy supervened, and in less than two years after that she was dead. The particular point I want to make in this case is, that a disease of that kind is not necessarily suppressed by drugs. The disease was not suppressed by the drugs which she had taken, the drugs seemed to be powerless, but the cold spinal douche did the business. A Case of Chorea Managed with Classical Homeopathy 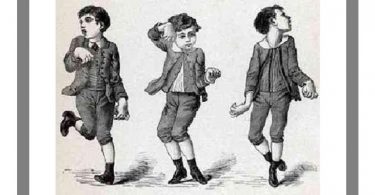 A German Physician educated at a European university, was a disciple of Homoeopathy, and in later years became a practicing physician in Bath, Northampton county. Pa., and one of the founders of Homoeopathy in Lehigh county. He was also on the faculty of the homeopathic college in Allentown, PA (U.S.) along with Drs. Hering, Freytag, Romig, Pulte and Detwiller. (circa 1830).