Dr. Pankaj Prashar reminds us that a special rapport with the patient is needed to gain a deeper understanding of the case.

The world’s second largest system of medicine today, Homeopathy is considered to be the ideal system for completely diminishing the chronicity of any illness. But to achieve this aim, what is demanded by a physician is a healthy and trustworthy doctor-patient relationship…listening and not just hearing.

As homeopaths, we understand the difference and the importance of listening, as it is the only way of understanding the man in the disease … as stated by ― J.K. Rowling :    “Understanding is the first step to acceptance, and only with acceptance can there be recovery.”  Recovery in the most gentle and permanent way, can hence be aimed at, only by understanding the reactions of the man to the external agencies, especially in times of suffering and pain. These reactions can only be understood by listening, patiently and compassionately to the man in the disease.  From a patient’s perspective, this character sketch justifies the long session one gets when he visits a homeopath for the first time for his chronic illness. It is the disease which has crippled the lifestyle of the patient to an extent that at times it has been endless suffering on the mental and physical plane.

This is where the case taking process in homeopathy differs largely from any other system of medicine.  It is a most important aspect of the treatment and it requires a great deal of expertise on the part of the physician to extract the inner essence of the human being in disease. Only then, will he be able to restore the healthy state and cure the suffering individual of his symptoms and disease.

The long case taking at times becomes irritating for the patient, having to revisit all his symptoms and traumas, feelings and chronology of the events. Here again, the physician is expected to offer a helping hand. Reassurance to the patient about the importance of doing so, helps the patient build confidence in the physician. It assures that his explanations are actually helpful in understanding the core of his inner self and hence his disease. The process not only develops a required healthy doctor-patient relationship, but also creates a sense of security in the individual and helps us get the best cure and hence bring laurels to our system of healing.

I would like to present the case of a patient whom I was treating for his gastric ailments for about two years. Being an active politician, he was always busy attending meetings and had long working hours, irregular eating and sleeping habits, intake of high-carbs and high-fat foods. He experienced irregular bowels movements, insufficient stools and lots of gastric disturbances. As to his mental state, he was a man of character and was seemingly outspoken, domineering, critical and a respected gentleman. No one could question his authority, though he was patient enough to listen and understand the problems of others. In the initial probing, he was hesitant to open up, and could narrate only the superficial qualities of his character. He had some family issues, which he was hesitant to discuss, except to say that he was not happy with his elder son.

Prescribing on the basis of this case, he initially improved in his symptoms and showed positive trends. But still, occasionally, the problem used to reoccur and he had difficulties in dealing with his daily chores.  He was kept on some specific medicines for the same, as per his symptomatology.

At the end of twelve months of treatment, he decided to leave homeopathy and to opt for some other medicines. He took some allopathic medicines which helped him and he was better. He stopped the treatment and the problems started recurring.

With no solution to his sufferings, he again approached us and this time we made him understand the utmost importance of our deep rooted case taking procedure. He described two incidents where he felt humiliated and insulted, after which he always had anxiety in facing such situations and hence the gastric ailments. He was prescribed another set of remedies, after which he was tremendously improved, not only in his physical ailments but also in his mental anxieties.

The medicine prescribed as per initial consultations was Nux Vomica 200, which was later changed to Staphysagria 200 . Such is the importance of developing the trust and relationship factor in the patient, and hence helping him overcome his sufferings in the most gentle and permanent way.

Our master has stated, “understand the man in disease and not the disease in man”. He meant to emphasize the core understanding of the human being, his inner secrets, his attitudes and fears, so as to help him not only in his physical symptoms but also affect his personality traits to make his quality of life better. 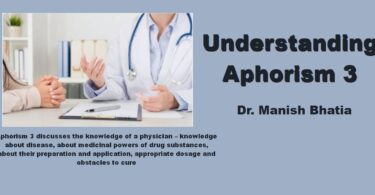 Dr Pankaj Prashar , B.H.M.S., M.B.A-HCS, worked with Dr Batra's Pvt Ltd. as a Branch Head of the Chandigarh branch for 11 years. He was the regional head for the Punjab region handling 5 branches across Punjab from 2008-2011. Dr. Prashar has treated patients with many different illnesses and prescribes remedies following the core homeopathic principles. He is a firm believer in classical homeopathy as has seen miraculous results with it. He has special experience in handling cases of allergies and female gynecological problems. His interests include training new doctors, sharing his knowledge and experience and writing about homeopathy so people become more familiar with this beautifully logical scientific method of cure.
He currently practices at his clinic, Solviva Health, in Mohali.