Homeopath and veterinarian Dr. Ronit Aboutboul presents a case of chronic eye ulcer in a cat.

Can homeopathy help with a case of chronic eye ulcers in a cat, of suspected viral origin, that hasn’t been reacting to any treatment, surgical or medical, oral or topical, for several years? That’s the question that I was asked over the phone one fine day in August 2010. My reply was, as usual, that it might help, or not – depending on multiple factors.

Garfield, a chubby 6 year old domestic short haired Ginger cat came to the consultation, presenting with an active corneal ulcer on his left eye. The ulcer had appeared about a year earlier and had been treated by an ophthalmologist with various oral and topical conventional medications.

The only treatment able to control the accompanying symptoms of chronic discharges and a constant eye spasm was a combination of 3 eye drops medications – Zovirax (acyclovir), Okacin (lomefloxacin) and FML (fluorometholone)- which were given daily over the last months, or else “the cat seemed to be suffering a great deal”.

Garfield’s medical history showed a chronic and consistent eye problem that was being followed by veterinarians for several years. Since a young age, about 6 months old, he’d been noticed to keep his left eye shut often. In the summer of 2008 he started shutting his right eye too, and was taken to the treating veterinarian. Since there were no noticeable local symptoms he was vaccinated and sent back home. Several days later he was rushed back to the veterinarian with a red and painful eye. An acute neovascularised corneal ulcer was then diagnosed and he was referred to an ophthalmologist who confirmed the diagnosis and performed surgery on the eye. The ulcer had healed and the accompanying pain, redness and spasm symptoms were gone. A corneal opacity, probably due to scarring, has remained in the right eye ever since.

A year later, in the summer of 2009, the cat started showing the same symptoms, in the left eye this time, was taken to a second phthalmologist that diagnosed a corneal ulcer and had prescribed a medical treatment that he’d been on ever since.Considering the medical history, follow ups and symptoms, a Herpes virus infection, chronically affecting both eyes, was the agreed diagnosis.

On his left eye a vascularised ulcer was prominent, along with some scleral neovascularisation and redness [picture 1]. He was getting daily treatments with 3 different eye drops to prevent him from blinking constantly. Other than his chronic and severe eye condition Garfield looked healthy and happy, with a beautiful fur. No other symptoms, of Herpes or any other origin, had ever bothered him.

We stopped the daily eye drops treatment and, after a 2 weeks’ pause, started with the homeopathic treatment:

Silicea LM2, 5 drops in the drinking water ball, once a day for a week. After an initial improvement during the first several days, he seemed to be blinking again and got another week of treatment.

At the first follow up, 5 weeks after the first consultation, he presented with an inflamed, red and painful eye. The ulcer seemed to be worse with one large corneal vessel and an extended opacity all around it. He also had a scleral reaction with redness and multiple enlarged blood vessels [picture 2]. The eye was shut spasmodically. Both eyes were tearing. The owner reported a history of ups and downs since the beginning of the homeopathic treatment, with some excellent days and some bad and painful ones. Considering the clinical findings and some understandable doubts and apprehensions, which would only be logical in our conventional side of the medical sphere, a conventional treatment with Fucithalmic (fucidic acid eye viscous drops) was prescribed in order to calm the eye and alleviate the pain.

The next follow up visit was to be scheduled weeks later and the owner was instructed to give the homeopathic remedy once or twice a week, depending on the eye’s condition, while using Fucithalmic whenever the cat seemed to be suffering.

Three months later, December 2010, at the next follow up, the left eye ulcer had practically disappeared [picture 3]. The follow up report given by the owner showed that, 3 weeks after the previous visit, after a few scattered days of homeopathic treatment and hardly ever administering the eye ointment, the ulcer had healed.

About a month later, on the next follow up visit, Garfield looked at us with clear, tearless, wide open eyes [picture 4]. According to the owners, there was no more blinking, pain or discomfort. The homeopathic treatment was stopped one week after the last follow up in December.

Several months later, at the next follow up, Garfield’s eyes looked healthy and bright. On the left eye the ulcer had left just a tiny corneal opacity unstained by fluorescein, probably scar tissue. The owners reported just one episode of aggravation, when exceptionally noisy restorations were done in the neighbors’ apartment. The cat disappeared then for 2 days and was found hiding behind the fridge with an inflamed, tearing and painful left eye. A couple of days later, when Garfield calmed down and relaxed, all the symptoms disappeared and the left eye looked fine.

Considering the suspected chronic Herpes viral infection and because of the post vaccines aggravations that were observed each time, we recommended avoiding vaccinations and performed vaccinal titers for Calici, Panleucopenia and Herpes viruses instead. The Herpes virus titer came out the strongest, as we expected, confirming the suspected Herpes chronic infection.

At the last follow up, October 2011, Garfield looked happy and healthy and so did his eyes. The homeopathic treatment was stopped one year before, in October 2010. The owners said that his eyes are fine except for rare sporadic days in which he seems to blink more often with his left eye which stays clear and healthy.

The choice of Silicea in Garfield’s case was guided by the cat’s character and his pathology as well as by the local physical symptoms of obstinate chronic eye ulcers brought on by a deficient immune system, or rather a weakened vital force. The gentle and sensitive character of the cat that hides when there’s noise and bustle around, along with the physical sensitivity allowing the chronic viral infection to resurface with every stressful situation suits well the choice of the remedy.

Silicea affects wound healing processes, encourages removal of foreign bodies and opening of abscess. It has a significant role in all healing and scaring processes, affecting ulcers as well as cheloids.

Garfield’s homeopathic treatment helped healing his eye ulcer by stimulating his body’s natural defenses back into action, or in other words by helping the immune system fight and remove the foreign intruder from within- the herpes virus. 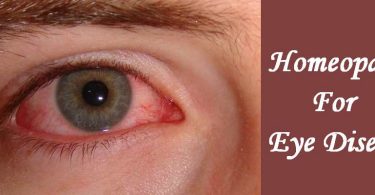