The patient this time is a thoroughbred horse.

He has an issue with his left ear. He didn’t want to be touched there. He also pulled to the left when he was ridden, he could not bring his left hind leg very well underneath him when ridden.

The owner called me because she was worried: a few weeks prior they saw him rolling in the comfortable sand of the yard. The rolling finished by Toby having a fit. After the fit he stood up and was fine.

Based on the description of what happened we assume that this was an epileptic fit.

A clinical examination confirmed his reluctance to having his ear touched. His teeth were fine and a blood sample came back normal.

I then asked the owner to tell me who Toby is:

The owner thought that he didn’t enjoy his job as a racehorse.

‘He was like a hat rack when we got him. He had a hole in his foot right up to the pedal bone (= the bone that sits inside the hoof. This is a very serious and usually painful ailment). Despite this severe hoof problem he was very happy. He is always very happy. He had special boot on his hoofs when he had this problem and he was very happy in his boots. He feels safe with his boots on.

When we first had him we could touch his ears. The ear-problem has been gradually creeping in over the last 2 years. We can see no reason why he does not want us to touch him there.

Now he is the king in the field with his mares. But when he first came we put him in the field and the mares bit him and kicked him. He just stood there for an hour doing nothing. He even stood there with a leg in resting position. Now he will put his ears back and the mares go away. He will stay happily on his own.

He doesn’t mind going to horse shows. But when the mares come to a show with him, he will be very protective of them. If he can’t see them he will kick out and bite and be very naughty. He naps and wants to go back where they are. If he knows the mares stayed at home he is fine. It is only when they come with us to the show that he misbehaves. He is happy they are there but worried somebody may want to steal them from him.

He doesn’t have a stallion behaviour. He never responds to the mares being in season. The mares will be all over him and he doesn’t care. But once he herded a mare away from the fence when she went too close to new horses that were put in a field on the other side of the fence. Once he knows he is not going to be separated from them he is OK.

He gets very proud of himself when he does something good. He works hard and progresses all the time. Once he slipped because the paddock was slippery and fell in a jump. The next day he was fine and showed no resentment to go jumping again.

When he had his fit, it was very violent. It lasted one minute and everything was fitting from head to tail.

In the field he nags the mares to gallop with him but he doesn’t play with them. He doesn’t respond to them when they approach him.

You can stroke him but he doesn’t want to be scratched. He is really sensitive to the hard brush.

When we go out on a hack, he rarely looks at the things around him. He initially wanted to race with the other horses but he is now not so highly strung to gallop.

No clear picture comes out of this narrative but the remedy we choose will have to rhyme with his rather peculiar behaviour to the other horses (the mares). It seems that he really needs their company; he needs to know that they are there for his company but at the same time he does not seem to be interested in them at all. One would expect a male horse, even when castrated, to be at least pleased when the mares in season are all over him. And the absence of reaction to the punishment he received when he first arrived in the field, is also very strange.

There are a few physical symptoms:

The owner witnessed him convulsing. It was a sudden attack of convulsing. No symptoms before, none after. Convulsions are not a frequent occurrence in horses.

He also does not like to be rubbed. Stroking is OK.

The owner explained that he needed to eat before he would interact with the other horses.

I have translated this into the following rubrics:

Mezereum is the only remedy that covers all these symptoms.

That is very interesting because Mezereum’s relationship with others is ambiguous. Also Mezereum is a remedy of pains related to the nervous system. The remedy is reputed for the treatment of shingles. There are 100 symptoms with ‘Face, pain’ that contain Mezereum in the Extraction from Radar 9.1. Has this something to do with why this patient does not want his left ear to be touched?

One other reason why the remedy seemed really indicated is the following. Marc Brunson (CLH, Belgium) proposed as a resume for this remedy the following: ‘When Mezereum was carried by the stork on the way to his birthplace, the towel in which he was held broke and Mezereum fell down in the middle of the desert and hurt his head on a stone. As a consequence he woke up with a headache, felt confused and looked around him and saw nothing but desert.’

It is almost as if this horse play-acted this when he arrived for the first time in the field. Also remember that the owner said at some point that he did not pay any attention to his surroundings when they went out on a hack with him.

He received Mezereum 30 twice per day for 2 days.

The remedy transformed him. There were no further fits. The shyness around his left ear disappeared and so did his left sided stiffness. I was also told that he finally discovered his racehorse blood. Since the remedy, many a time, the owner found herself galloping over the downs and jumping fences impossible to stop him. She told me she doesn’t worry about this because she feels he has really found himself since the remedy.

One year later he had a small relapse of touchiness around his ear (in the winter (January) = a modality of Mezereum) which disappeared in 2 days without the need for any treatment. 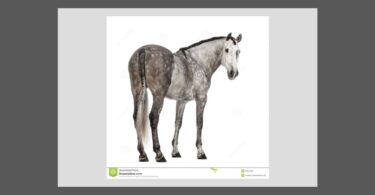