Lyme disease is an illness caused by infection within a bacterium (Borrelia burgdoferi) that is caught by being bitten by a tick. It causes an acute severe illness with a skin rash. It has been suggested that some people with the fatigue and muscle aches typical of chronic fatigue syndrome/ME really have chronic untreated lyme disease.

An acute infectious disease caused by spirochetes of the genus Borrelia, relapsing fever is transmitted to humans by lice or tics and is characterized by relapse and remissions.

Rodents and other wild animals serve as the primary reservoirs for borrelia spirochetes. Humans can become secondary reservoirs but cannot transmit this infection by ordinary contagion; however, congenital infection and transmission by contaminated blood are possible.

Coxiella burnetii, the only species in the Coxiella genus, causes Q fever. The Q stands for query because the cause of this infection was not known when it was first described in the 1930s and the investigators queried its cause. Q fever is a zoonotic disease that is often transmitted with exposure to cattle, sheep, and goats. The most common mode of transmission to humans is inhalation or aerosols or dust contaminated with dried birth fluids or excreta from infected animals. Direct animal contact is not required for transmission to occur. Infections via ingestion of contaminated dairy products and human to human transmission via sexual contact  or during parturition have been rarely reported.

Babesiosis is a rare, potentially life threatening disease caused by the babesia microti parasite, which is spread to people through the bites of infected ticks that live on animals such as deer and mice. Babesiosis also can be transmitted through blood transfusions. The parasite that causes babesiosis attacks red blood cells. Babesiosis can be mild or severe. Most people who are infected do not become sick. However, older people and people who have an impaired immune system or who have had their spleen removed are at increased risk of developing a severe infection.

Homeopathy is one of the most popular holistic systems of medicine. The selection of remedy is based upon the theory of individualization and symptoms similarity by using holistic approach. This is the only way through which a state of complete health can be regained by removing all the sign and symptoms from which the patient is suffering. The aim of homeopathy is not only to treat diseases caused by ticks but to address its underlying cause and individual susceptibility. As far as therapeutic medication is concerned, several remedies are available to treat diseases caused by ticks that can be selected on the basis of cause, sensations and modalities of the complaints.  For individualized remedy selection and treatment, the patient should consult a qualified homeopathic doctor in person. There are following remedies which are helpful in the treatment of diseases caused by ticks: 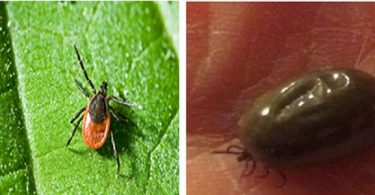 A Case of Tick Infestation in a Dog