Another fine example of working cancer cases by astute tracking of symptoms.

A middle-aged woman, the mother of one child, consulted me in April in regard to her right breast. I found a hard, irregular tumor in relation with a retracted nipple, about the size of a goose egg, adherent, the seat of lancinating pain. A sore, lame feeling extended to the arm, which was uncomfortable. The axillary glands were indurated. She suspected the truth, and dreaded the knife. Moreover she was an unusually intelligent and reasonable person, and a firm believer in Homoeopathy. I explained to her that the trouble was constitutional and not merely local,that it is my custom to carefully medicate before operating and that contrary to common belief, time cannot be lost by such procedure, but rather gained, for thus the parts and system are made ready for the operation — should an operation be considered advisable later, and the operation itself rendered more likely to give satisfaction, that recurrence is far more liable after early interference than after time spent in medicating homeopathically, especially, that the malignant formation and all it implied might perhaps be cured by homoeopathic medicine, thus obviating all need of mechanical interference and that our minds should constantly be in a hopeful attitude, even expectant of a cure, because such mental attitude encourages the physician’s best endeavors to aid an organization made as responsive as possible to curative agents, and not repulsive to them by reason of doubts, fears and worriment. She then promptly assented, and enlisted for the war.

My first prescription was conium maculatiim, two hundredth, to be taken in water four times a day until improvement should be noticed. It was not sufficiently similar to the case and produced slight amelioration only. Phytolacca decandra took its place. In making this change I was influenced by earlier history. Most women have a clear recollection of the pains which they have suffered during lactation. This one had. The pain began in the nipple, which was fissured across the crown, when her infant began to draw the milk, and radiated thence over the whole body. This is characteristic of poke root. (If it had been given then, would cancer have developed later?) It held sway for ten months, when improvement ceased and new symptoms appeared.

She had a hot vertex, cherry-red lips, did not react well after a bath, and had a faint, sinking feeling in the stomach at eleven a. m. On the strength of these characteristic symptoms I gave a dose of sulphur. It was high – Fincke’s cm. potency, a dose on the tongue. It worked well for over three months, when its usefulness was ended. An irregular menstruation came on, accompanied with hot flushes, intolerance of pressure around neck and waist, and poor sleep; all symptoms being worse upon awaking from sleep. Lachesis followed with perfect naturalness.

During all these experiences the cancer became better. Two months later another dose of sulphur was demanded. The homoeopathic therapeutist of large experience, who has piloted numerous important cases past the dangers of the climacteric into the port of health, will appreciate these movements. The medicine was effective, wore out, was repeated again, did excellent work and at the end of eleven months finished its mission.

In September we surveyed a vast improvement over the original case, but new indications appeared. There was more mental irritability and impatience; indisposition to mental and physical exertion and the sharp pains in the mammary gland were worse from motion. Therefore Bryonia alba, a dose of the mm. (B. & T.), began its work. Improvement followed and continued for two months, and then was again rekindled by another dose of the same medicine, which lasted until the beginning of the following year.

January seventh, 1902, after very close and persistent cross questioning, I learned that the sharp pain in the breast was not so much a stitch, or like the cutting of a knife, or the stinging of a bee, or the pricking of a pin, or the jagging of a splinter, but was most like a hot wire thrust through the organ. I therefore with great confidence prescribed nitric acid, cm. (Fincke) a dose on the tongue. It was the best prescription of the series, helped more than any that had preceded it, and lasted over a month before repetition became necessary. The second dose finished the case. In a few more weeks the patient was well. She has remained well since in every respect. After a warfare which lasted three years, complete victory was ours.

The inexperienced homoeopathic prescriber must not jump to the conclusion that nitric acid would have brought a more speedy cure if it had been given earlier, in the place of other medicines. Perhaps it would. I lean to that belief. However, the careful observer has not failed to see that every remedy but the first was followed by improvement and led the way to the next one.

Case : Cancer of the Uterus. —

The vigorous wife of a sturdy farmer was a helpmate to her ambitious husband. Together they worked, struggled, saved and became forehanded(well off). When maternity occurred she made short work of it and soon afterward returned to her routine life. The attending physician also appeared to be pervaded with impatience of delay and to have forgotten the precept which has been carefully taught by all obstetrical authorities, that “meddlesome midwifery is bad.” He shortened her natural labor with ergot.

He did it one time too many, and the consequences were a bilateral laceration of the cervix, a ruptured perineum, subinvolution and a complex train of symptoms. She became an invalid. Later operative interference was helpful, but the lesion on the right side of the cervix, and one inch of subinvolution remained unrelieved. She continually postponed another operation and patched along under difficulties.

At thirty-eight years of age menstruation became irregular, ceasing for a number of months and then flooding with dark and offensive smelling blood. The intervals were marked by an acrid, ichorous discharge; biting, itching, burning in the uterus, the burning extending to the right ovary, and accompanied with a sense of weight, bearing down. There was more pain between than at periods. The family noticed increasing irritability of temper.

The experienced physician listens with sorrow to such a recital. He has learned that it indicates malignancy. In this case the unrepaired part of the cervix was found to be the centre of a swollen, deep-colored, infiltrated mass, beginning to break down. The entire organ was swollen and sensitive to touch. Slides bearing smears of the discharge were submitted to a pathologist for examination; but the discharge alone, while showing characters closely bordering upon carcinoma and highly suggestive of it, was inconclusive. It was impracticable to obtain a section for examination. Macroscopically and clinically there remained no reasonable doubt of the diagnosis.

To this the pathologist, another medical friend, and I agreed. The patient accepted homoeopathic medicine as offering the greatest promise of relief from suffering and of permanent cure, and came under my care.

The symptoms of this case are also recorded in the homoeopathic materia medica in the provings of kreosotum. I gave it, in the two hundredth centesimal potency, in water every two hours when awake. As improvement advanced the intervals between doses were lengthened. No other medicine was given. In less than a year the patient was well, the parts being in healthy condition and no symptoms remaining. Three years have since elapsed and she remains well.

From: Homoeopathy in Medicine and Surgery by Edmund Carleton, M. D. Dr. Carleton was president of the International Hahnemannian Association in 1894. 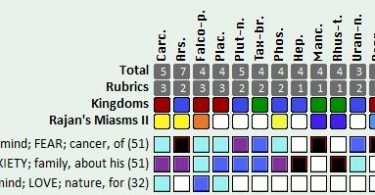 Scope and Management of Cancer Cases in Homoeopathy