Cannabis is a sycotic remedy. It is a remedy of the plant kingdom and belongs to the addictive group of “drug” remedies. As in other sycotic remedies, we see a cover up for a feeling of inadequacy. Like other plant remedies Cannabis has oversensitivity. It also has a sense of isolation and other symptoms common to the group of “drug” remedies.  The perceived weakness is actually an inadequacy in facing the threats, dangers and risks of the outside world. The Cannabis person feels unequipped to face them directly and hence observes the world from within the safe confines of a “glass cage”.

Cannabis indica is the one who is locked inside the house. This is not an ordinary house but a palace. Thus although he is very well provided materially, he is lonely. There is a total lack of any kind of stimulus within the confines of this house, but he fears to step out of it, since he feels it is risky to do so. So he stays within this house, fearful of the dangers outside, and he makes up for the lack of stimulus by building fantasies and viewing things in a far more exaggerated form than they appear in reality – his sense of perception becomes exaggerated.

Colours appear brighter, sounds sweeter, distances are exaggerated and life becomes extremely peaceful and beautiful. One of my patients had a dream that he is alone in a huge, palace-like house, and is looking out of a window. Outside there is a beautiful garden and a very beautiful lady wearing a blue coloured dress is walking. The thing that impressed him the most in the entire dream was the blue colour of her dress: “It was the most fascinating shade of blue”, he said. He did very well on Cannabis indica. From this dream we can understand that stimulation is sought by looking out of the window, the source being present outside of his house (because he is afraid to step outside). Also, all impressions and perceptions are very much increased. But behind these pleasant fantasies lie fears. Cannabis indica has never gone out of his glass house into the outside world. Hence when he goes out, it is terrifying for him since the outside world is too harsh for him, especially with his heightened sensitivity and perception. There is fear of threatening danger.

The inside bores him while the outside terrifies him, therefore he takes Cannabis inside the house to keep himself stimulated.  Cannabis is a social drug, i.e. it is taken in groups. Its intake removes any sense of isolation that a person may feel. It is the drug of the Hippies – they are well off materially, but isolated, forsaken and bored. They form groups and seek stimulus from music, flowers, bright colours (they usually dress up in very bright colours), nature, etc.

Gautam Buddha’s is a Cannabis indica story. He was a prince who was never allowed to step out of his palace. Once, overcome by boredom inside the palace, he went out for a chariot ride in his kingdom and saw first a sick man, then an old man, and finally a dead man. He found this outside world too cruel and harsh. He perceived what he had seen with a lot more sensitivity then a normal person, and could not take it.

California, where I conducted the proving of Cannabis indica, is the place where Cannabis is a quite popular drug. California is the home of Hollywood, of several television programmes and soap operas like Santa Barbara. In fact the very theme of television and cinema is the theme of overstimulation without risk.  Inside the safe confines of one’s home without any kind of risk, one can get stimulated by watching television.  And everything – both the beauty as well as the dangers – is exaggerated in films and in television programmes. Interestingly, television too is an addictive habit and I believe that somewhere the themes of Cannabis indica and television are similar.

o Delusion, injury, is about to receive. 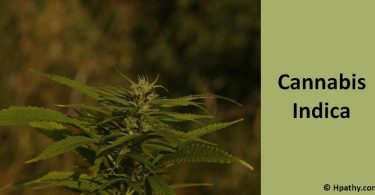 The Soul of Remedies: Antimonium Crudum