The word abortion comes from the Latin word, abortion, which means to abort, miscarry, and deliver prematurely or before the fetus reaches a viable mature stage that is 28th week of pregnancy. An abortion is the termination of pregnancy. It can be spontaneous or can be performed through either a surgical procedure or the use of certain types of medication, but the term most commonly used for induced abortion. Unsafe abortion is one of the main causes of maternal mortality and morbidity even though it is legal for a variety of circumstances in almost all countries.

Homeopathy is one of the most popular holistic systems of medicine. The selection of homeopathic medicine to prevent abortion/miscarriage is based upon the theory of individualization and symptoms similarity by using holistic approach. This is the only way through which a state of complete health can be regained by removing all the sign and symptoms from which the patient is suffering. The aim of homeopathic medicine to prevent abortion/miscarriage is not only to manage abortion/ miscarriage but to address its underlying cause and individual susceptibility. As far as therapeutic medication is concerned, several remedies are available to treat frequent abortions/miscarriage complaints that can be selected on the basis of cause, sensations and modalities of the complaints. For individualized remedy selection and treatment, the patient should consult a qualified homeopathic doctor in person. There are following remedies which are helpful in the treatment of abortion/miscarriage in females:

Sabina – This is a remedy useful to prevent impending abortion occurring about the third month, ushered in by the appearance of blood, which is oftentimes the first symptom; then follow pain in the small of the back, going around and through the pubes ; there are forcing and dragging pains from the sacrum to the pubes. The flow is bright red and clotted. It is useful for metritis accompanied by flooding from miscarriage. Cinamomum. Useful for abortion from a strain or misstep with profuse haemorrhage and slight pain. Arnica. Threatened miscarriage from trauma.

Secale – For miscarriage in the early months of pregnancy Secale may be the remedy, especially in feeble and anemic women. It is useful for checking the tendency to miscarriage in the later months, when the muscular tissue of the womb is largely developed. It is indicated by frequent labor-like pains, a copious haemorrhage of black fluid blood, a wan sunken countenance, tingling and formication of the extremities and a desire for air. Hartmann recommended Secale 12.

Viburnum opulus – homeopathic medicine to prevent abortion or threatening miscarriage when the pains come from the back around to the lower part of the abdomen and go into the thighs. It will often stop these spasmodic pains. It is a remedy to be used in frequent and early miscarriages. Sepia is one of our most important remedies as a preventive of miscarriage. It is indicated by nervous irritability, laxness of tissues and a sense of weight in the anus. Belladonna. Threatened miscarriage with profuse hot haemorrhage, backache, headache and the peculiar uterine tenesmus of the remedy and violent aching of the body. The least jar is painful.

Cimicifuga – One of our most powerful homeopathic medicine to prevent abortion/miscarriage ; the pains indication the threatened miscarriage fly across the abdomen from side to side doubling the patient up. It suits habitual abortion in women of a rheumatic diathesis. Aconite. Impending abortion from anger, also Chamomilla ; the mental conditions, however , will be different with Chamomilla; great nervous excitement will accompany the pains. Caulophyllum. A very useful remedy in false labor pains and also as a preventive of abortion. There is severe pains in the back and sides of the abdomen, feeble uterine contractions and scanty flow.

Aconite Nap. – threatened abortion caused due to fear and excitement.

Arnica Montana – homeopathic medicine to prevent abortion/miscarriage which are threatened in nature due to accident.

Aletris Far. – Habitual abortion resulting due to weakness and anemia.

Sepia – abortion during fifth to seventh month of pregnancy.

Syphilinum – abortion due to syphilis

Caulophyllum – habitual abortion due to weakness of uterus

Thuja – tendency for abortion in females who have history of gonorrheal disease.

Thyreoidinum – avoid miscarriage and tendency to premature labor when the cause is not mechanical in its origin. Prevents threatened abortion when there is thyroid dysfunction in females, It helps to control slow oozing from uterus.

Tuberculinum – abortion due to tuberculosis

Gelsemium – abortion due to mental excitement, the pain extends from abdomen upward and finally settles in the back.

Ipecauc – when there is continuous flow of bright red blood along with colic and nausea.

Ferrum met – abortion in chlorotic females, with amenorrhea and leucorrhoea

Calcaria Carb – plethoric women who are disposed to leucorrhea, with premature menstruation

An abortion can occur spontaneously due to complications during pregnancy or can be induced, in humans and other species.

The term abortion most commonly refers to the induced abortion of a human pregnancy, while spontaneous abortions are usually termed miscarriages.

The occurrence of recurrent pregnancy loss is 1%. A large majority (85%) of women who have had two miscarriages will conceive and carry normally afterwards.

Fetal and maternal complaints are the two major causes of miscarriage.

Causes related to fetus are mainly related to genetic makeup of the fetus. The most frequent cause of miscarriage in the first trimester of pregnancy is abnormal development of fetus, that is either due to chromosomal abnormality or teratogenic factor.

Immunological factors may also present as a responsible factor for miscarriage. Another common cause of early miscarriage includes abnormalities in implantation. Placental circulation does not develop due to inadequate implantation, leading to poor fetal nutrition, which ultimately may cause miscarriage.

Miscarriage may also cause when the corpus luteum on the ovary fails to produce sufficient progesterone to maintain deciduas basalis.

Failure of the growth of fetus due to an infection may also cause miscarriage, infections like Rubella, Syphilis, and Poliomyelitis readily cross the placenta and can produce complications.

Teratogenic drugs like isotretinoin can be a cause for miscarriage.

Other causes mainly include

Signs and Symptoms of Abortion

The physical symptoms of a miscarriage vary according to the length of pregnancy:

Primary diagnosis mainly include physical examination along with medical history

Miscarriage in a Cat Solved by Cuprum Metallicum – by Mirjana Zivanov 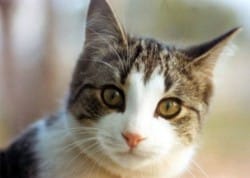 Miscarriage in a Cat Solved by Cuprum Metallicum