Hay fever (allergic rhinitis), is an irritation and inflammation of mucous membrane of nose characterized by ·         Medicines that do not gives another compensatory suffering such as sleepiness, dullness etc.

Homeopathy treats the person as a whole. It means that homeopathic treatment focuses on the patient as a person, as well as his pathological condition. The homeopathic medicine for allergic rhinitis are selected after a full individualizing examination and case-analysis, which includes the medical history of the patient, physical and mental constitution etc. A miasmatic tendency (predisposition/susceptibility) is also often taken into account for the treatment of chronic conditions. The homeopathic medicine for allergic rhinitis given below indicate the therapeutic affinity but this is not a complete and definite guide to the treatment of this condition. The symptoms listed against each homeopathic remedy may not be directly related to this disease because in homeopathy general symptoms and constitutional indications are also taken into account for selecting a remedy. To study any of the following remedies in more detail, please visit our Materia Medica section. None of these homeopathic medicine for allergic rhinitis should be taken without professional advice.

While the most common cause of hay fever is an allergy to grass or tree pollens, identical symptoms may result from inhaling other dusts, such as fungul spores, animal hair, and house mite droppings.

When hay fever symptoms are seasonal, the timing of their appearance depends on the sort of dust that causes an allergic reaction in the sufferer. The first pollens to appear each year are tree pollens, which can cause hay fever in early spring, depending upon the how severe the winter has been. Pollen from trees is a powerful allergen and frequently causes hay fever. Later in the season, typically in midsummer, grass pollens appear for a short season; they are then followed by ragweed pollen.

Hay fever is most common in people with a family history of similar complaints or a personal history of eczema, hives (urticaria), and/or asthma.

Upper and lower respiratory diseases, including asthma, sinusitis, and otitis media with effusion, frequently complicate allergic rhinitis. The close association of nasal allergies with these conditions has been supported by extensive epidemiologic evidence.

If these diseases are unsuccessfully treated, a chronic state of inflammation, obstruction, and infection develops that can cause mucosal damage and, ultimately, chronic disease.

When left untreated, allergic rhinitis often becomes chronic and may lead to complications including:

An Attack of Hay Fever – by Oksana Frolov

Allergic Rhinitis in a Woman of 25 – by Sayada Rukia Begum 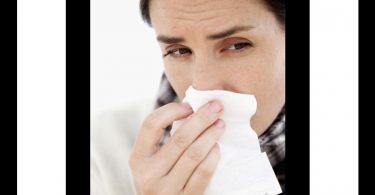 Allergic Rhinitis in a Woman of 25