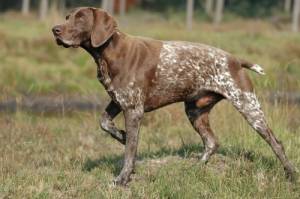 Seizures in a German Shorthaired Pointer yield to a homeopathic remedy.

Presenting Symptoms – Seizures – one last Christmas and one in early March and seems to have a three-month cycle.

No family history of epilepsy.

The owner did not see the first fit, but saw the second. He ran past the owner flat out and went inside the house. He fell on the left side (3) with his legs going, mouth champing up and down, froth and foam from his mouth. (3)

When he came out of it he didn’t know his owner (3) or where he was.

Disorientated (3) jumped away from his owner < being touched (3) Staggered around a bit.  Afterwards he was not tired or sleepy, more frightened (3). He was hyperactive then, jumping wanting to do things. He was also whiny and clingy. Panting (3) Can’t settle and wanders around.

All the fits have been in the daytime, (2 around midday and one at 7pm)

Fits do not last more than 5 minutes.

The washing machine when it’s going (2) Walking along planks (heights?) and the seesaw Lawnmower (2) Fishy odors. Won’t go near or touch things that smell fishy.

Prostate problems 2 years ago. He had blood from the sheath and blood in his urine. Veterinary treatment was with antibiotics.

No other accidents, illnesses, traumas, or operations. Vaccinated and wormed regularly without incident. No family history of epilepsy or seizures in his breeding.

Desires cheese, (3) has a good appetite will eat most things. Averse  chicken flavoured dry food. Thirst : Used to drink a lot, when he was on dry food, changed him to Mighty Mix, and dog roll, and now does not drink as much.

Lies in the sun, < heat (3) and exercise in the heat (3) Nearly got sun stroke hunting. > Chilly weather.

Friendly, laid back sort of dog, doesn’t tear around like a fool, just barks a little at visitors and then is all over people like a rash. Dominates other dogs; doesn’t fight. Doesn’t fret if in the kennel or van, but  < other people’s vans. Used for stud  – he’s a ladies’ man.. Highly sexed and tries to ride strange bitches.

The remedy was given based on the following rubrics:

Mind, recognise his relatives does not

p 41.  In clearly idiopathic cases of epilepsy with no organic lesions.

Also, Cuprum has the reputation that if it does not cure it will lessen the frequency of the fits.

Follow up:  18 months later contact from the owner who said he’s just had another seizure. Rx repeat the remedy as above.

Follow up : 18 months later. Contact from the owner. He’s just had another seizure. Rx repeat the remedy as above.

Follow up: 18 months later one small seizure. Repeat the remedy.

This is the last we heard from the owner of what would by then be a 13yr old dog.  She was delighted with the results of the remedy and was happy with his treatment.