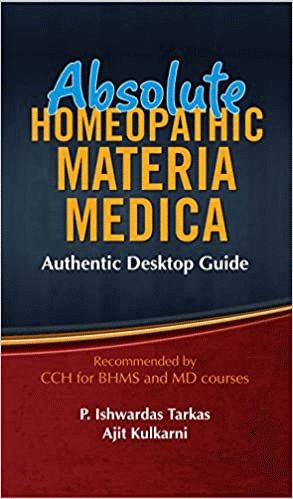 Why would I want or be interested in yet another Materia Medica? Don’t we have enough of those sitting on our bookshelves? And especially one named after a vodka? (Absoluut if you did not get it…).

I was intrigued by comments made about this one being different, modern, more oriented towards the clinic and very much down to earth… but only 150 remedies for more than twelve hundred pages, not a characteristic of a desktop guide.

I was not disappointed.

The Materia Medica of each remedy is divided into three parts: Generals, Particulars and Relations.

The Generals are subdivided in categories:

Particulars include the old Hahnemannian listing from Head to Skin, without the Mind that has been moved up, and the thermal state where the rubrics of chill, heat, sweat and fever have been put together.

Relations focusses on comparative materia medica, where one can see how other remedies would fare in a case and may be direct towards considering another remedy that might be more precise. The authors have introduced many new words, when compared to other comparative Materia Medicas.

At each step, comparisons with other remedies are given in brackets, sometimes with comments or clinical tips, removing in my case the feeling of reading a catalogue or a phone book while trying to understand a remedy (and often falling asleep during the process), replacing it with “Lightbulb moments” of enhanced interest, renewed learning and cortical stimulation.

Fair to say this book has achieved its purpose but has a few limits: I was looking for Sepia; not there; then for Silica: not there; but Bartfelder is included… never heard of that one and some others, yet it must have been used frequently and with success by the authors. Clearly, we need and expect a few more volumes written in the same vein.

Other than frequently used remedies, is there something else missing?

A repertory, with rubrics rewritten and based on those three parts and their subcategories.

A very deep and serious proofreading! Too many typos! And rarely a few sentences do not make any sense at all. I consider that this book should find a place of honour in every homeopath’s working space; therefore, it deserves the utmost care in presenting itself as being of high quality at all levels and not botched up during printing.

To my fastidious mind, this is not acceptable and is an insult to the authors. I have been assured by one of the authors (A.K.) that a new edition has been fully proofread and all needed corrections made.

That being said, just buy the book, you will not regret your investment!