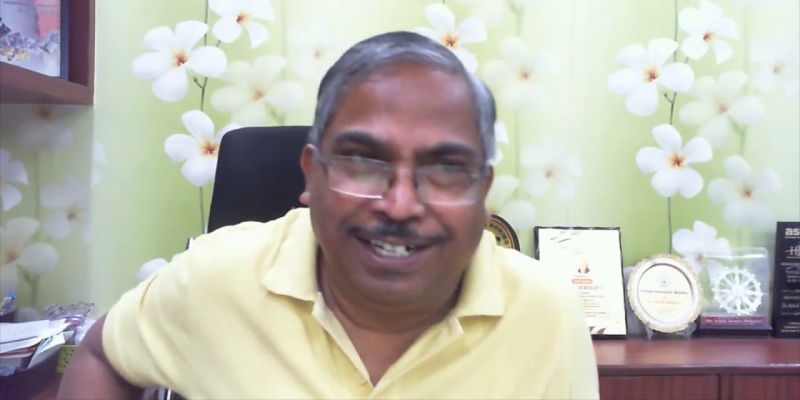 “We all die. The goal is not to live forever; the goal is to create something that will.”  The same withholds true to our late Beloved Master, Dr Ashok Mohanty Sir. Engineer by profession and a homeopath by passion and choice, he is known as one of the most spectacular teachers and orators ever, whose wit, sharp intelligence and sense of humor could keep the crowd glued to his lectures. The amazing ability to perceive the patient made him a sharp prescriber and he made it so easy for the students to observe the key to a case.

He worked in the Indian air force as an engineer. He was in awe of his grandfather who was a great homeopath in the village of his hometown in Orissa. His grandfather used to treat village animals also with homeopathy.

Dr Mohanty witnessed miraculous cures by his grandfather and his instinct always attracted him towards homeopathy. After retiring from the Indian air force his passion overpowered him and in order to pursue that passion he completed his BHMS and post-graduation in psychology, to start his practice from 2000 under the guidance of the revered Dr M L Sehgal. He conducted hundreds of seminars in India and abroad, individually and in collaboration with Dr Milind Rao (Founder HHF) and brought homeopathy to the next level.

Dr Ashok Mohanty was a very busy homeopathic doctor at New Delhi. He was the chief editor of the homeopathic journal ‘Aude Sapere’. He was a master prescriber on mind rubrics with intriguing insights of the mind section of the repertory. Many novel understandings of these rubrics were explored by him he made it easy to apply them in the clinics.

The rubrics like ‘clinging with restlessness” of Carbo veg, “delusion he is a locomotive” of cannabis, “walking in circles” of Thuja, “money sewed in clothes” of Kali brom amongst hundreds more were his best understandings about very commonly prescribed remedies.

The students were spellbound by his versatility. His sad demise has produced a huge void in the world of homeopathy. He will always remain in the heart of his students and fellow homeopaths. He was one of the greatest orators and teachers in homeopathy, with a mesmerizing smile, he will be missed forever. However, his wit, superb understanding, sharp observations and versatility will remain ignited in the hearts of all homeopaths.

Involve, Evolve, Be With everlasting love from HHF family Dr. Mayur Mahajan (M.D Homeopathy) has been practicing homeopathy in India (Mumbai),Thane, for the last 24 years. He is President of Hahnemannian Homoeo Forum (HHF), an institute for learning and sharing knowledge and helping budding homeopaths across the country. HHF has 25 centers across India. We the practice single dose method and give great importance to the mind section of the repertory in understanding the man in disease. Dr. Mahajan is author of two books: Little angels (pediatrics individualization) and Managing Pain with Sweet Pills. Visit him at his website: www.alliswellhomeopathy.in